Edgar Erle Smith Master of His Own Vessel

Being a sea captain may not be on a lot of people’s bucket lists when it comes to jobs they’d love to experience at least once in their lifetimes, but for one man, it was.

When Edgar Erle Smith IV was attending college, the idea began to take shape in his mind. 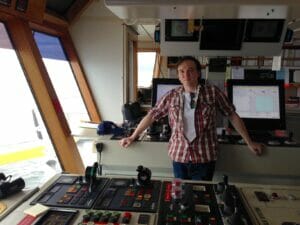 “I was attending college at Ole Miss and simply wanted to take and break and try something interesting for a while,” Smith said. “I really didn’t have all that much self-confidence at a young age and I was searching for something where I could prove myself. The idea of going to sea was inspired by Richard Henry Dana’s “Two Years Before the Mast,” a memoir by a Harvard student in the mid-1800s that dropped out of college to do pretty much the same thing for the same reasons.”

Smith is the Master of the AHTS Reliant. (AHTS=Anchor Handling Towing Supply vessel), a ship that does everything from normal supply work for a rig, to towing them and installing/adjusting the subsea mooring systems that keep them in place. He’s been working as a professional mariner for 11 years, 8 years as an officer and 5 years as Master.

“I actually wasn’t aware that this particular niche of the industry existed; I simply woke up one morning and drove to the gulf coast, based on a vague awareness that there was a considerable amount of water there and that vessels tended to congregate around large bodies of that,” Smith said. “My original intention was to find a job on a long liner or crabbing vessel in Alaska, but my attempts to arrange something over the phone met with no success. A friend who had done that suggested I possibly should get some experience somewhere else and learn which end of a boat was which before I reapplied. So I took his advice and drove to the coast, spent a few days bumping around, and had someone point me in the direction of oilfield support vessels. And thus here I am.” 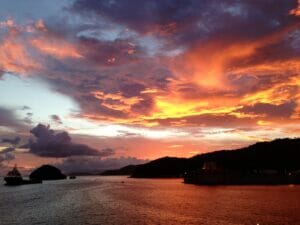 Smith’s family farmed cotton in Tallahatchie County outside of Glendora, so according to him, he had the standard country boy experience down pat.

“I very much enjoyed hunting, fishing, riding horses, and other things of that nature,” Smith said. “I had almost no exposure to the maritime industry and that was one thing that attracted me to it: it would be such an alien experience for me.”

Smith attended Lee Academy and Strider Academy and both Ole Miss and Delta State, where he earned his private pilot’s license and learned photography and filmmaking, although he admitted his incessant class major switching left him a few credit hours short of a degree.

“I mainly focused on taking things that interested me,” he said, “instead of one particular course.” Currently, Smith lives on 145 acres outside of Grenada and often spends his summer off-time in San Francisco, to the point that he kept an apartment there for several years. And while he’s not as active as he once was, Smith has also been involved in independent film production in the past and served as Cinematographer on a few local productions. He also enjoys tactical training and travels several times a year to attend classes. 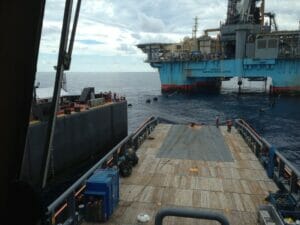 Being the master of a sea vessel offers him adventure and a chance to travel to places he may never have seen without such an occupation.

“While I do travel extensively, I mainly work in this hemisphere, mostly in our Gulf of Mexico area, but also occasionally down to the Caribbean and South America,” Smith said. “I’m currently working in Trinidad on a pipeline installation project, probably running through the end of the year. I particularly enjoy Trinidad, it is much more laid back that the American GOM while still managing to get things done. They also have a local breakfast staple called “Doubles” that I’ve become hooked on. It consists of fried flatbread filled with curried chickpeas and it’s delicious.”

The adventure part of his job might be translated as the “dangerous” part for most people, as Smith has experienced his fair share of risk of life and limb at times. 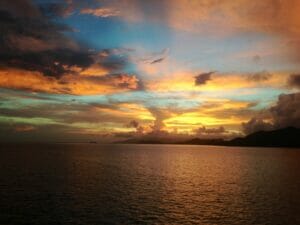 “Most areas I’ve been to are relatively safe,” he said. “However, Venezuela has a serious piracy problem and it’s starting to spill over into Trinidad, so we try to avoid the hotspots when possible and follow certain anti-piracy techniques. One result of the piracy is the local fishermen often run at night without navigation lights and small, wooden-hulled vessels can be difficult to pick up on radar during rough seas, so we’ve had a few close calls despite posting extra lookouts. That’s just one of the indirect effects of a piracy problem.”

And the hazards of just day-to-day operations are more rampant than your average job might incur.

“I have had a few close calls in other respects too, Smith said. “I had a near miss where we went to move a rig while loaded down with drilling mud, and the weight of the fluid combined with the weight and tension of the mooring system as the rig pulled us in against the seas, dipped the stern under and we dove like a submarine. The entire main deck was under water, you could look out the portholes and see blue water and not foam, and waves were breaking over our 01 deck and flooding past the bow. We later did stability calculations and determined we were within 4 inches of sinking. This was right before I got my license, and it taught me the importance of a Captain being willing and able to say ‘no’, because we should have never agreed to do that job loaded the way we were. 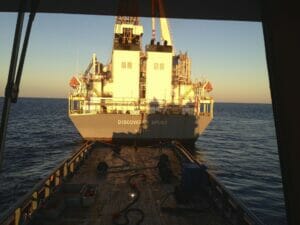 Also a few months ago, we had a steering failure that was particularly stressful. I had just gotten to the vessel and for various reasons I had been up for quite some time. I went to my room and was so tired I crashed with my clothes on thankfully, because I was awakened by my chief mate screaming on the phone about 30 minutes later after we had gotten underway that he had lost steering and was heading for the rocks. I ran up to the bridge about 5 seconds later, to see that we had lost steering while making a turn with heavy traffic and were headed for a rock lined bank, with several other vessels close by. Somehow, just using the bow thrusters, I managed to not hit either the rocks or the other vessels, and managed to gain enough control to make it to a dock. That hitch was not fun.”

Smith’s normal schedule is 28 days on/14 days off, however the last year or so he has had to transition to an even time, 28/28 schedule. When onboard, the standard is 12 hours on/12 hours off, but sometimes goes to an 8 hours on/16 hour off schedule, depending on what type of operations are going on.

“Some operations require my presence, so I may have the mates handle the day-to-day operations and I ‘float’ as needed so I can be up,” Smith said. 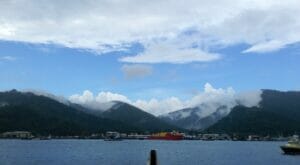 Smith credits his job with building strengths he didn’t even know he had until he had to reach down below sea level and find them.

“I can honestly say it has made me a better person. I’ve learned to be a leader and a manager, and gained tremendous self-confidence and maturity,” Smith said. “I’ve got a great crew and it means a lot to me that I have earned their respect and I do what I can to maintain that.”

Angela Rogalski is a HottyToddy.com staff reporter and can be reached at angela.rogalski@hottytoddy.com. This article first appeared in the Delta Business journal, a publication owned by HottyToddy.com contributor, Scott Coopwood.