In my home state of Mississippi, I had done plenty of whitetail and turkey hunting with my bow, and even taken some nice bucks while hunting the rut in Illinois. Elk hunting, on the other hand, was a dream that I never thought I would see come true, especially at 25 years of age. Many things were going through my head as we saw an abundance of pheasant, antelope, mule deer, and finally — my first elk. 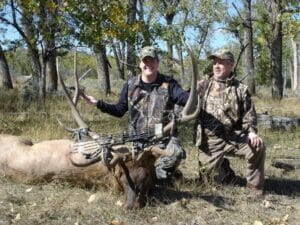 I had first found out about this hunt the Christmas before, when I received it as a gift from my father. He’s an avid elk hunter, and I was enthralled by his stories of bugling bulls and beautiful river bottoms. At Fort Musselshell Outfitters, elk hunting is a tree stand affair. Each morning and evening, hunters are strategically placed between food sources and bedding areas.

After checking our equipment and shooting our bows, we settled in for the night and prepared for the next day’s hunt. The next morning, I was 16 feet up in a stand on the edge of an alfalfa field. It was truly amazing to watch a herd or nearly 140 elk interact. In my first morning in elk country, I saw two bulls in a vicious battle for superiority, along with other aggressive rutting behavior. The closest elk came to within 175 yards of me before being spooked by two hunters on public land just across the river. It was a sinking feeling to watch the entire herd disappear into the mountains.

Even though my first morning was filled with ups and downs, there was still the afternoon to look forward to. After a warm meal and a short nap, my father wanted to go to a stand a little early for the evening hunt; it did not take long for everyone else to agree. With six hunters in camp, the guides decided to draw out of a hat for treestands, so placement would be fair and unbiased. I drew a ladder stand that was nestled in a row of cottonwood trees a mere 50 yards from the Musselshell River. I could see two spike bulls as I slowly climbed the ladder and got into position. Over the next three hours, I watched a 300-class six point keep an eye on his cows and patrol his domain. After a while, another elk began to bugle about 300 yards in front of my position and across the river. I watched and waited with anticipation for the other elk to appear, but to my dismay the first bull herded his cows across the river and toward the other bull.

The 300-class bull wasted no time in retreating when he saw the larger, dark-horned six-by-six approach across the open field. I videoed that bull at over 200 yards, thinking how nice it would be to have an opportunity at such an animal. This was the bull my guide, Destry Harris, had told us about. He was clearly the dominant bull in the valley.

After a short time, he began chasing cows in my direction. I watched through my camcorder’s viewfinder with amazement as the bull headed for my position. I remember thinking to myself while I was recording that it would be nice, but the odds of him crossing the river back to my side seemed bleak. Just in case, I put the camcorder to the side and readied my bow.

Within minutes i had 13 cow elk at 15 yards, walking straight for the bottom of my tree. The wind was perfect, hitting me in the face. I was thinking I did not stand a chance with 13 noses and 26 eyes so close to my position. To my amazement, the cows came directly under my tree! I could not get any closer. I watched as the bull crossed the river and began thrashing trees at about 50 yards. After stunting the saplings’ growth, he herded his last six cows straight for me.

As I drew my bow, the bull was running toward my stand – closing to a mere five yards. The last cow ran into my ladder and nearly knocked me from the stand. I managed to maintain my balance and come to draw all at the same time. I turned as the bull passed. Miraculously, he stopped quartering away. In the next split second I had to decide whether I had a good angle and if so, where to aim at this massive animal only feet away from my broadhead.

I squeezed the trigger and my arrow buried into the fletchings just behind the bull’s left shoulder. I knew I had made a wise decision; the bull struggled to run and quickly collapsed 100 yards from my stand. I had done it! A trophy bull elk was on the ground on my first day of elk hunting. The feeling was indescribable as I stared at the large animal on the ground in front of me.

I had to stay in my stand until dark, because other hunters were only 100 yards away, Amazingly, not 10 minutes later a fellow hunter named Ed Williams shot another six point as I videoed the action.

For most hunters, the excitement is over after the initial harvest. In my case however, my adventure was only beginning. Destry told us that when elk are in the area, we are not to get out of the tree until they pass. If the herd is spooked, it can ruin the hunt for the other hunters for the next few days. I heard some bulls in the distance, but thought that I had plenty of time to get out of the fields and to the road to catch a ride. After going about 200 yards, I realized I had made a big mistake.

Standing on top of the river bank, I watched in fear and amazement as an entire herd of elk came crashing through the river and in my direction. With no flashlight and no knowledge of what to do, I looked around for a place to seek shelter. All I saw were two old logs lying together few feet away. As a bull bugled about 20 yards in front of me, I crawled up next to the logs and prayed I would not be trampled. I listened in fear as the herd came stomping and splashing toward me.

All I could hear was the trampling of feet and the breathing of bulls as the elk emerged from the riverbed and began to pass by. The scent of the bulls filled the air as they bugled and herded their cows, just six or eight feet away. Even though it was dark, I could make out the outline against the sky of a large bull facing me. Hot air poured around his face and neck as he bugled and chuckled. I would be a liar if I said I was not scared beyond belief. Bull elk are quite intimidating when you are laying beneath them in the dark. After many prayers and what seemed like an eternity, the elk cleared my position and I saw the light of my fellow hunter, Ed. I have never been so happy to find another person in the dark as I was when Ed and I joined up.

Ed was thrilled and kept congratulating me on my trophy. As we got to the road, I was greeted by Destry and my father. Everybody was full of hugs and congratulatory remarks. Little did they know what I had just been through.

I was told later by Destry that a herd of about 140 elk had come through, most coming in six to eight feet away. No one knew that I was out of the tree and in such a situation. I was filled with mixed emotions from the ups and downs of the afternoon hunt. That night at dinner, my nerves would not even let me eat. After I shared my story, Destry suggested I send it to Eastmans’.

My first bull elk green scored 347 6/8 gross and netted 337 1/8. What a trophy…what a hunt….what an experience! I hope this was not my last elk hunt. I love bowhunting and intend to continue hunting big game animals at any and every opportunity. Experiences such as these can test out strength and increase our faith. This world is full of the wonders of God’s creation. I hope to see and experience many more in the years to come.

Luke Guest is a part owner of Hunters’ Hollow. This story was originally published in Eastmans’ Bowhunting Journal.