Adams: You Can Make Anything A Positive Thing!

How we look at things, especially initially, makes a world of difference regarding our attitude.

There is an elderly lady that I have known for years. She was always single, then I ran into her a few years back and she told me that she had recently become married for the first time. She was in her late 70’s. “I never looked at myself as an old maid all those years no one asked me to get married,” she told me. “I always looked at myself as undiscovered treasure.”

Wow! That is a positive way of looking at things. I was in Columbia on a bus going on an excursion. The road was very bumpy. I mean we were bouncing up and down in our seats. It was starting to make me a bit negative. Then the guide said, “Don’t think of it as bumpy. Think of it as a … massage!”

Those are spins we can put on things and then there is Initial Spin which is very important in building and keeping a positive attitude.

In WWII a family in England raced to their bomb shelter when the Nazi planes came for another raid. Inside they heard the destruction and when they came out they saw that there house was gone. What remained was a crater. The father used initial spin: “We have always wanted to have a home with a basement. Now we can have one!” By taking that perspective from the start he launched a positive approach to the considerable work that was going to be ahead of them.

I put this to use a number of years ago when my house was hit by a tornado. A massive beech tree was uplifted and dropped on the roof causing all kinds of roof damage. I knew there would be months of clean up work, but took the initial spin of “I needed a new roof and now will get one.” Don’t tell the insurance guy I took that approach since they paid for it.

There have been many cases where property devastation has led to people coming away with a more positive attitude. I once read of a church near me that suffered significant fire damage. The pastor immediately told the local media that he thought God would bring many positives from the challenge. Indeed the neighboring community rallied around the church. Many started attending that never had before even though they lived nearby. Their youth group grew as a church band developed and called themselves “After the Fire.” When the building was finally repaired they saw their attendance grow significantly.

Speaking of churches, there once was a couple sitting near a family with a crying baby. The husband became irritated and muttered something about the noise. The wife took the initial spin of “be thankful that we have families with young children…some churches are struggling to get them in their buildings.”

When someone close to us dies it is obviously a very hard time. Though there is grieving, I always try to take the initial spin from the Dr. Seuss quote: “Don’t be sad it’s over. Be glad it happened.” Yes, there is sadness that they are gone, but when you think about all the good things that happened when they were there you become grateful to have experienced those things. 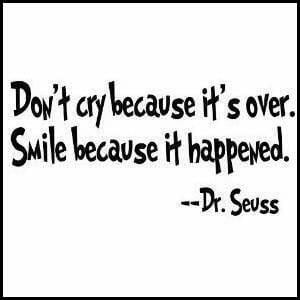 You can use humor as an initial spin even in the most serious of scenarios. I delivered ”How to Build a Positive Attitude and KEEP the Darn Thing!!!” for the staff of the University of Alaska-Fairbanks. While there they talked with great pride about their national championship winning Rifle team which was coached by Dan Jordan. When Dan was a student-athlete there and one of the best rifle competitors in the world he had a serious fall while rock climbing. He fell and crashed to the rocks below. It was so serious that he is partially paralyzed to this day, yet when it happened he was able to spin some humor. When paramedics got there and rushed to his side one of them asked, “Are you allergic to anything!?”

With a positive attitude, Jordan became a Paralympics rife athlete and remains the only person to shoot at a world-class level among both the able-bodied and Paralympics level.

Staying positive and focusing on what he could do, Jordan became head Rifle coach at the University and guided them to three national championships in his first three years as coach. He was named national coach of the year for three straight years. Ironically, he became the president of The Optimist (Civic) Club in Fairbanks! I remember being up in Fairbanks one time and happening to catch an article on him. In it he simply said he tried to have as good of an attitude as possible about things.

If you want a Doctorate in Initial Spin, try what the fellow in Vegas did when he was out there with his wife. She was in the shower getting ready for dinner. There has been a time or two in world history where a wife takes longer than she says to get ready for an evening out, so the husband leaned his head in the bathroom and said he was taking a couple of dollars down to the roulette table. He got down there and did a double or nothing on black and won. He did another double and won. He got on a roll to beat all rolls and his money kept doubling. He got up to a couple of grand. Glancing at his watch, he knew it was time to go back upstairs but figured one more roll. He put it on red and it landed on black. There went those winnings.

He got back to the room and the wife asked him how he did. He simply replied, “Oh, I lost two dollars.”

One of my local Civic Clubs near my base in South Bend, the Elkhart Morning Rotary, asked me to come speak to them last week about the development of my new program on Life Lessons from Lake Placid and the Miracle on Ice.

It made me think of Godfrey Dewey, the extremely driven son of Melvil Dewey. Melvil had created the Dewey Decimal system we all have used, and then created Lake Placid as America’s first winter resort.He had many winter sport venues built. Godfrey took the ball and ran with it, going to Europe during the 1920’s to pitch the village of 2800 to host the 1932 Winter Olympics. The Winter Olympics had started in 1924.

For Godfrey, it started in a local Civic club. On March 21st, 1928 Godfrey delivered his first public address on trying to get the III Olympic Games in front of the Lake Placid Kiwanis Club. Someone thought it incredulous and asked, “Why?!” Godfrey answered, “Why not?!”

Little Lake Placid outbid powerful Yosemite and their Hollywood backing and many other cities, and got the 1932 Games, and then applied and applied until they got the 1980 Games. Now, they are going after a future Winter Olympics in a scenario where they possibly team with Montreal.

I write this week’s newsletter to you from here in Lake Placid where I am doing more research on my programs. I continue to be amazed by the inspiration that comes from here, and the incredible spirit and ‘can do’ attitude.