Meek School of Journalism and New Media students will display their investigative reporting of the voting activity in the Mississippi Delta next Tuesday at the Overby Center for Southern Journalism and Politics at University of Mississippi. 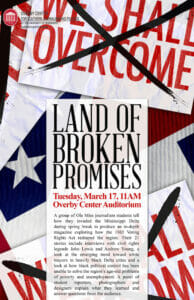 Nine student reporters and three student photographers spent their spring break last year in the Delta with Overby Fellow Bill Rose. These students then followed up on more leads in several following weekends after. They documented the effects of the Voting Rights Act of 1965 and how the Delta region has changed since then.

Their investigative reporting yielded 24 stories with interviews including Civil Rights movement leaders such as Young and John Lewis. The Meek School of Journalism and New Media published these stories in a magazine, The Land of Broken Promises. That magazine is a part of a series of Meek School in-depth reporting in which two have won the Robert F. Kennedy Journalism Award for nation’s best collegiate journalism. One was even named the nation’s best college magazine by the Society of Professional Journalists.

Bill Rose said, “Most of these students had never been to the Delta before. They learned quickly. They got some fascinating interviews and tackled tough political and racial issues.”

The 24 stories show how the Mississippi Delta was the crowning achievement of the Voting Rights Act then. The Delta changed from an all-white power structure to powerful movements from the black political influence.

Rose will moderate the panel of students who worked on the magazine. They will talk about the challenges they faced and lessons gained from their investigative reporting. The event is at 11 a.m. Tuesday, March 17. The event is free and open to the public.