If you cross the Tennessee River when entering Decatur, Alabama, at night, don’t be deceived by the flickering lights coming from the industrial park that lines the river — this is no big city. Boasting a population of around 150,000, the River City is home to historic, outdoor and culinary adventures. 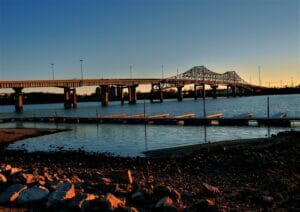 Each new season brings different opportunities to get out and about in Decatur. Memorial Day weekend brings the Alabama Jubilee to the town’s Point Mallard grounds. Hot air balloons cover the golf course and later the skies as part of a 37-year tradition. Point Mallard is home to a water park featuring America’s first wave pool and has become a staple location for hot summer days.

Late summer brings Riverfest with barbecue cook-offs and country music performances adjacent to the river. During September, you can find a reenactment of the Civil War Battle of Decatur between the troops. Around Christmas, you can tour the competitively decorated homes of Albany, the town’s historic district.

Decatur’s heritage dates back to the antebellum years when the town was a mecca of Alabama trace because of its proximity to the river and its terminal location on the Tuscumbia-Courtland-Decatur railway line. Following the Civil War, Decatur was left with only four buildings standing, one of these is the Old State Bank which dates back to 1833.

The Carnegie Visual Arts Center, located downtown, features ever-changing exhibits from local and national artists while the Princess Theater hosts local productions and concerts. Efforts have been made in recent years to reinvigorate downtown Decatur, bringing with it the Carnegie Carnival, a growing Mardi Gras festival and fundraiser for the museum.

Big Bob Gibson’s Barbecue, called Best in Alabama by the Birmingham News, is a must-eat stop for any Decatur visitor. Friendly service and sweet tea are offered upon walking in the door, and there’s always room for their homemade pies for dessert. Don’t head home without a bottle of Big Bob’s famous white barbecue sauce, which is bottled and sold in the store, and as I learned upon moving away from Decatur, is not found much anywhere else.

Whether it’s food, history or adventure you’re after, take it from a common saying among us natives — it truly is “Decatur, where it’s greater.”

Olivia Morgan is a HottyToddy.com staff reporter and can be reached at olmorgan@go.olemiss.edu.