The Oxford Treehouse Gallery’s hosting of Milly West and David Rae Morris’ photography expedition: CLARKSDALE 1985 will have a closing get-together tomorrow from 3 p.m. to 6 p.m.

The photography exhibit came to be from two friends, West and Morris, who met up in Clarksdale one January day in 1985. Morris shot in black and white while Milly shot in color all along the 4th Street in Clarksdale.

The exhibit was displayed at the Clarksdale Film Festival this past January before the Neill husband-wife duo of Oxford Treehouse Gallery hosted it for past two weeks.

Milly West, who will be appearing at the get together tomorrow, said, “Thanks to you all for your continued conversations and comments about our work.” She also pointed out that Vivian Neill has pottery, jewelry and crafts for sale at the event.

West also wants to extend her gratitude to her former student, Houston Cofield, son of Glenn Cofield and grandson of Jack Cofield, who drove to Oxford to see her work. Houston Cofield is a third generation Cofield photographer and also nephew of John Cofield who has contributed historical photos and stories to HottyToddy.com. 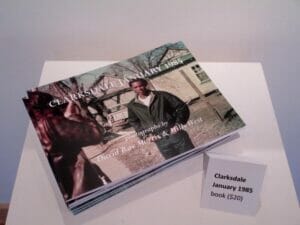 For those interested in looking at the photographs can purchase its companion book titled CLARKSDALE 1985.