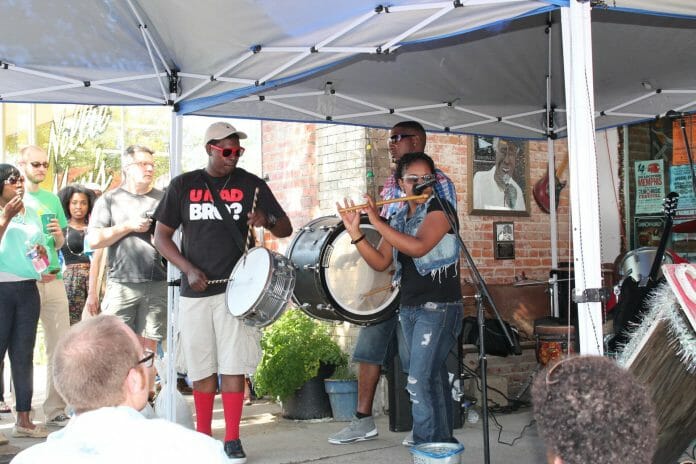 Being the granddaughter of Otha Turner, Sharde Thomas knows what it’s like to grow up under the influence of a very musical grandfather. Mr. Turner was one of the last well-known fife and drum players who performed in the traditional blues style. A disappearing art form, Sharde is determined to keep the fife and drum combination alive.

“I grew up wanting to do what my grandfather did,” Thomas said. “As he was traveling around and playing the fife and drum, I just wanted to do it too.”

Thomas said one day she walked over to her grandfather’s fife, picked it up and started playing. Her grandfather saw her genuine interest and before she knew it, she was playing on stage.

“My first show was at the annual picnic that my family has in Gravel Springs, Miss. in 1997 when I was seven-years-old,” she said. “He handmade my own fife and I’ve been playing ever since.”

In 2011, Thomas said she received a very surprising phone call about another artist who was a big fan of her grandfather’s and of Blues music in general, and who really wanted to talk to her: Eric Clapton.

“I was very surprised, especially when he told me what a hard time he’d had getting in touch with me,” she said. “He went through one of my friends in Nashville and when my friend called me and said Eric wanted to talk to me, I was excited and more than a little nervous.”

Thomas said that Clapton wanted her to play fife on his latest record. So it wasn’t long until she and her sister were winging their way to New York to meet Eric Clapton and Thomas was looking forward to playing with him.

“He was a very nice guy,” she said, “very laid back. And I thought I was going to be so nervous, but I had so much fun working with him. We sat in the studio and talked, ate lunch, and he was just down-to-earth and very nice. We connected really well. And I’m very glad he chose me to play on his record.”

Thomas said she and Clapton stay in casual touch with each other, sending emails occasionally. But he stays so busy that their present communication is unfortunately only minimal.

Thomas said her grandfather started out playing the drums and he had a friend, Napoleon Strickland, who introduced him to the fife.

“Then later on, my grandfather just starting putting some of his grandkids together,” she said, “and before he knew it he had a band. He had been playing since he was around 10 or 11-years-old. And he kept right on playing until he got too sick.”

Thomas not only travels and performs on a pretty regular basis; she’s also a student at Delta State studying to be an elementary school teacher. How does she do it all: the traveling, performing and keeping her grandfather’s tradition alive, plus trying to keep her grades up?

“Well, I wouldn’t tell anybody that it’s easy,” she said. “With the traveling, booking the shows and practicing with the guys, and trying to go to school – it’s a lot of weight on my shoulders. But at the same time, it’s a good experience for me. I want to carry my grandfather’s tradition on.”

Thomas said the whole idea of her grandfather’s style of fife and drum blues is very exciting to her. And hopefully, she will be able to pass it on to a younger generation, such as her niece who has just started to pick up the fife.

“This summer I’m going to work with her,” Thomas said. “And hopefully I can mold her like my grandfather molded me. That way if something happens to me, she’ll be here to carry the tradition on.”

Thomas said that even after she graduates and is teaching, she still plans to keep right on performing and teaching the younger ones her grandfather’s music.

“I’m still going to do my music as well,” she said. “I want to teach a younger generation about how to play fife and drums. I’m definitely going to keep the music alive and teach school too.”

Angela Rogalski is a HottyToddy.com staff reporter and can be reached at angela.rogalski@hottytoddy.com. This story first appeared in The Cleveland Current, a publication owned by HottyToddy.com contributor, Scott Coopwood.