I was an emotional roller coaster yesterday. My 22 year old son Jack Adams, who was born in Oxford in 1992 and lived here until his family moved to South Bend, officially entered the United States Navy. I drove him down to the local Navy Center and somehow kept it somewhat together as we hugged and said goodbye.

If you have ever dropped a child off to college and then driven back home knowing they would be gone for months, that is tough. Well, the military drop off is a whole different level. You can forget about being productive at work the rest of the day. All you do is stare at mementos, old pictures, and you drive around town remembering what happened here and what happened there. 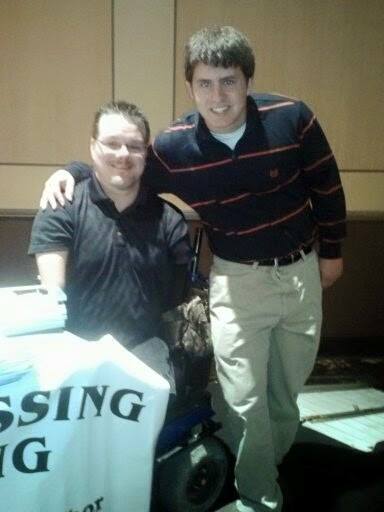 There are all those different emotions of being proud that he will be serving our country and our freedoms, as well as the possibility of risk. You deal with wondering where he will be stationed and for long. There is the remarkable pride people show towards what he is doing. Several months back when he made his commitment, I put it on my Facebook page and I thought the thing would blow up from so many ‘likes’ and positive comments.

I have written here in the Tuesday newsletter before about Jack and his insights on customer service during his days of working at Chick-Fil-A while in college at Indiana University-South Bend. That was the most ‘opened’ e-newsletter I have written over the last 10 years. I am far from the perfect parent, but growing up one of the things I did was share with him what hundreds of corporate and organizational leaders have told me before delivering talks, and that is the importance of attitude, customer service and being a team player.

Jack has always had a positive attitude. I told him the most positive person I ever covered during my 23 years in TV News was Brett Eastburn, who was born with no legs, no arms, and in his view no handicaps or disabilities. Jack got to meet Brett once, after hearing him give one of his unforgettable motivational talks.They are very similar in that they always put a positive spin on things and uplift the group they are with at whatever time and circumstance.

We all have our strengths and his is computer. It is also his passion. He tested extremely high with the Navy and will focus on computer work on a base or on a ship. He does 9 weeks of Basic at Naval Station Great Lakes near Chicago, then train for a year in Pensacola, and then have a 4 year commitment that could go twenty. Hard to tell. However long, he will have skills coming out that will make him highly employable.

Jack has gone to Evangel Heights United Methodist Church here in South Bend since he was in pre school. On Sunday, the church honored him during service and then everyone shook his hand afterwards.

Among them was a man well into his 90’s and a true American hero – Superior Court judge Bob Miller (photo below). It is hard for him to get to church these days, but he made it to forge the bond between a new generation of Navy. 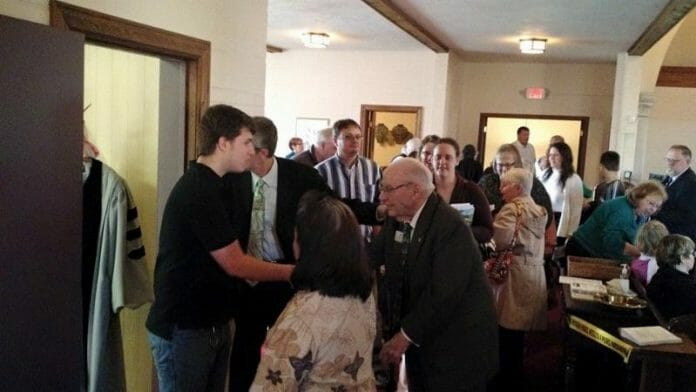 Miller was a gunnery officer on the port side of the aircraft carrier USS Essex in the Pacific theater of WWII. Columnist Bill Moor once wrote that a kamikaze plane hit below Miller’s 40-millimeter gun and threw him across the deck. He suffered a concussion among other injuries. Although he received a Purple Heart for the incident, he didn’t seek medical attention until he got his gun crew firing manually again. He was there when the Japanese kamikaze exploded on it in 1944 (below). 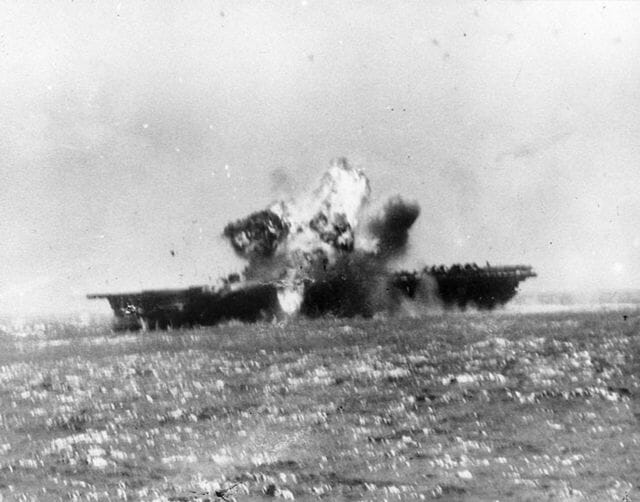 While Miller was aboard the Essex, the ship withstood 357 Japanese air attacks and set, get this, a naval milestone by spending 79 consecutive days in combat. Miller put many holes in kamikaze planes and would later sail with the Essex triumphantly into Tokyo Bay.

Educated at Harvard and Notre Dame, he would later form Miller’s Vets, a drill team of selected homeless Veterans in here in South Bend. He would later receive the Sagamore of the Wabash, the highest honor in Indiana, and the Rev. William Corby, C.S.C. Award – Notre Dame Alumni 2011.

I have sat in on Talks Miller has delivered, and it is chilling to hear him tell of proclaimed atheists sing a whole new tune as a Japanese plane is dead set on crashing right into them.

One thing I have tried to do as a parent is take Jack (and my two girls) to inspirational places in America, and places that show the glory of God’s creation, like Alaska, where he experienced the wonder of coming across a moose feeding in a lake. 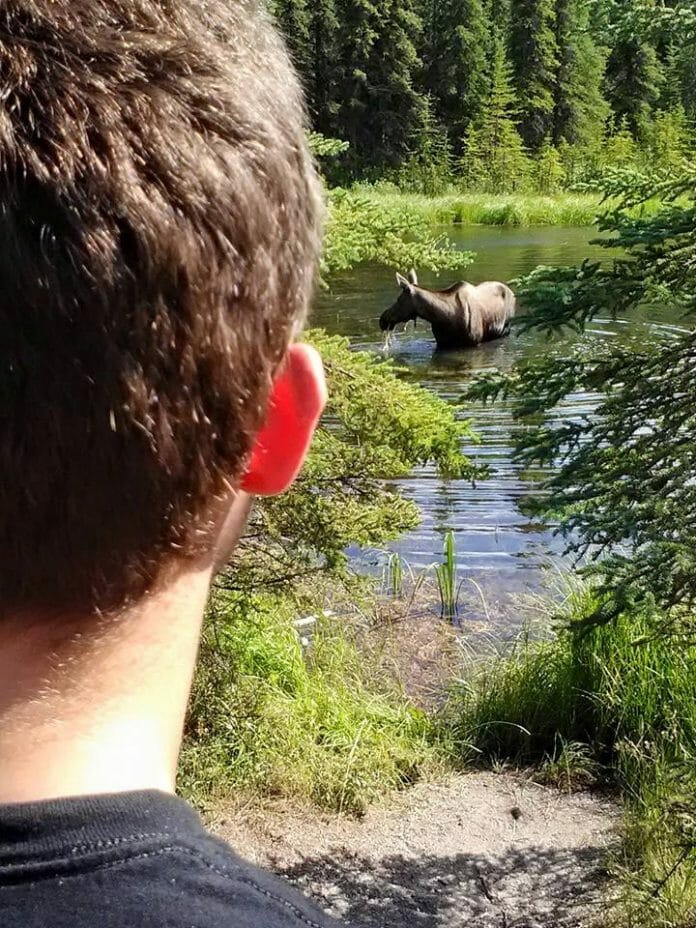 If you have kids, have you ever marveled at the things they can do so much better than yourself? Jack co hosted a group trip to Alaska with me one time, and beforehand read all of James Michener’s book Alaska. That’s over 1000 pages! From memory he delivered daily talks to the group from the book. I just shook my head as I couldn’t have remember 1/25th of that without notes. The group was mesmerized, and each morning when I would start the day with my inspirational stories they would look at me like, “Charlie, hurry up and get done so Jack can talk!” 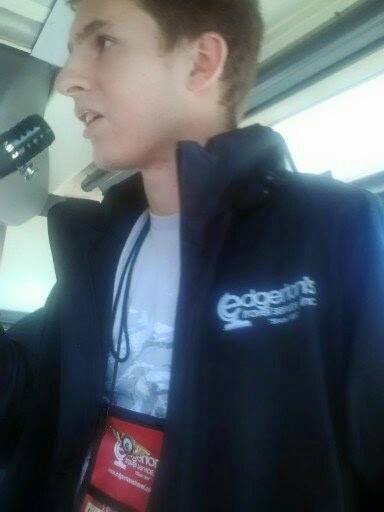 Growing up, my mother and father took me to Smithsonian, battle fields, and all kinds of historical places. I found history to not be just fact filled, but inspiring!! If there is anything I have tried to do is impress upon him how history is motivating because of the courageous things those before us did to build our country.

Among the places he has been have been the Flight 93 Memorial in Pennsylvania, the 9 11 Memorial in New York, Valley Forge, Gettysburg, and all things D.C. He has gone to Lake Placid, where in 1932 Billy Fiske would win gold in the bobsleigh and later be the first American to die in WWII, enrolling early in England’s Royal Air Force because of his disdain for Hitler and love for England, where he had been educated. He would become a History major in college.

Jack went with me on a group trip to the Pacific Northwest and was so taken by Portland that he will one day settle there and raise a family. Hey, Portland has the world’s smallest park (a whopping 513 square inches). Weddings have been held there, but it is so small only the bride or groom can stand on the park at once. Portland has Voodoo Donuts, with donuts such as The Loop – raised yeast doughnut with vanilla frosting and Fruit Loops! They used to have some with Pepto Bismal and Nyquil in them until the Food and Drug Administration said you can’t do that!! And Portland has their famous Rose Garden. First Lady Eleanor Roosevelt said she once had heard they had named a rose after her, and that she was flattered. However, she said she looked it up and the description read “Not good in bed but great up against the wall.”

Sounds like he has picked an interesting place to dwell one day!

I think one of my fondest memories was when we were in Alaska and we watched the lumberjack show in Ketchikan. The lumberjacks were hilarious with their games of rolling on logs. I turned and Jack had the biggest smile, and a laugh we should all try to have a few times a week – one of those gut busters. 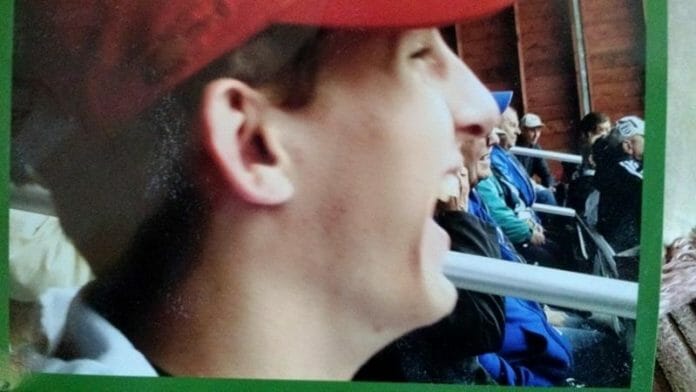 To this day, it makes me think of what Jim Valvano said in his final days of battling cancer: “To me, there are three things we all should do every day. We should do this every day of our lives. Number one is laugh. You should laugh every day. Number two is think. You should spend some time in thought. And number three is, you should have your emotions moved to tears, could be happiness or joy. But think about it. If you laugh, you think, and you cry, that’s a full day. That’s a heck of a day. You do that seven days a week, you’re going to have something special.”

Jack is in his first full day of Basic Training today near Chicago. A former Navy vet wrote on my Facebook that “he will not like those first few days!” Imagine the adrenaline, excitement and wondering how his limits will be challenged? I would imagine about now his hair has been buzzed, and some fellow is hollering at him. When he made this decision months ago, the first thing I did was go buy a DVD of “An Officer and a Gentleman” with Louis Gossett, Jr. Am I bringing back memories? 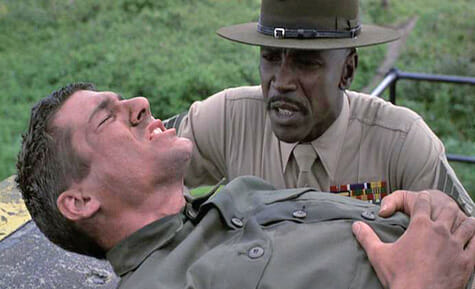 After we watched it, I told Jack the chances are slim that he will have to deal with anything like Foley!!

Have a blessed week. Finally, I wanted to bring back the Tuesday enewsletter that set the record for Opens…the one with what Jack learned about Chick-Fil-A’s customer service.