33 Campus Construction Projects You Should Know About

The University of Mississippi campus is constantly improving and growing to accommodate our increasing student population. Over the next few years, several construction projects will enhance student life and transform the campus.

Coulter Hall Additions and Renovations: Renovations to Coulter Hall began in 2013 and the four-story east addition includes research laboratory space and support offices. The single-story north addition added a 200-seat auditorium, lobby and food service installation. Two existing laboratories are being renovated and will serve as teachings labs. Construction is estimated to be completed in May 2015. Sally McDonnell Barksdale Honors College Renovation: In March 2014, the renovation and addition on the Honors College began. The 15,695-square-foot addition will add classrooms, study nooks, administrative offices, a conference room and lounge area. The addition is expected to open by December 2015. Existing facilities will also be renovated after the addition is completed.

Music Hall West Wing Renovation: The west wing of the music building is getting a complete renovation, which includes a new porch for receptions and events, new facades, new entrance, a renovation of mechanical systems in the west and south wings and minor HVAC modifications in the Nutt Auditorium. Construction is estimated to be complete by May 2015.

Parking Garage: The university broke ground in 2013 on the new five-story parking garage next to Vaught-Hemingway Stadium. Construction is ongoing on the facility, which includes 829 parking spots. Reservations are available for spots for faculty and staff. The cost is $500 annually and selections will be made on a first-come, first-served basis. 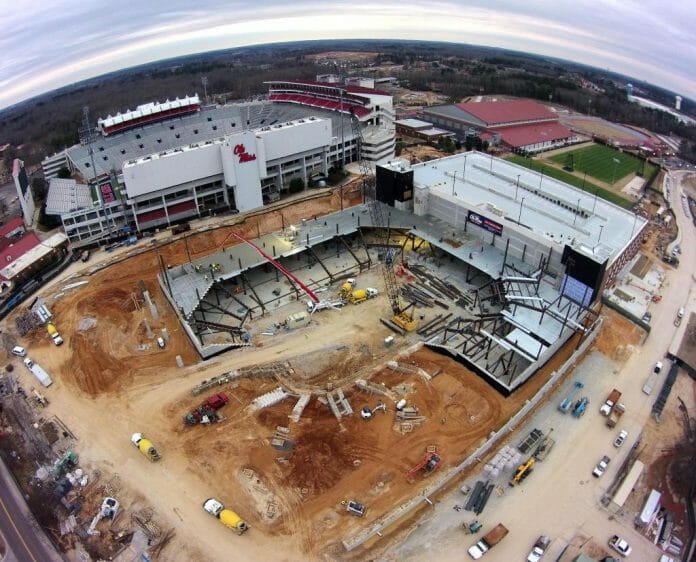 The Pavilion at Ole Miss: Construction of the much-anticipated multipurpose arena is well underway. The new arena will includes seating for 9,500 fans, a student concourse, courtside seating, 1,500 premium seats and other amenities. It is expected to be completed for SEC basketball play at the beginning of 2016.

Residence Hall 1: The new Student Housing building on Northgate Drive is a four-story building that will look much like Burns Hall. The building will accommodate 304 beds and should be ready for occupation by August 2015.This new residence hall, not yet named, is between Crosby Hall and Northgate Apartments. 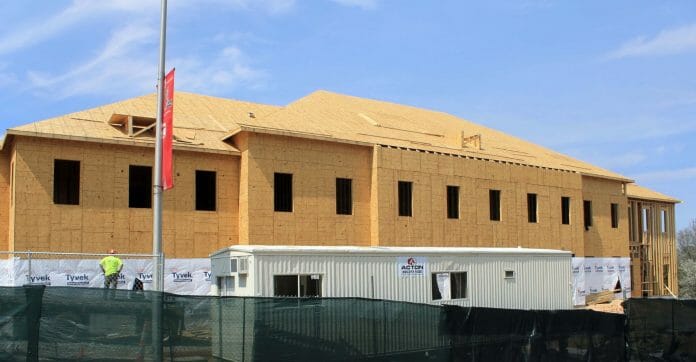 Residence Halls 2 & 3: Enrollment is steadily growing and so is housing. At the former site of Guess Hall on Rebel Drive, the university is building two new five-story residence halls to house 624 students. Demolition of Guess Hall finished earlier this year, and the new buildings have an estimated opening date of August 2016.

Vaught Hemingway South End Zone: An expansion of the south end zone is underway, adding 30 luxury suites and 770 club-level seats. This work is expected to be completed by the beginning of the 2015 football season. The west skyboxes are also undergoing interior renovations to improve safety and comfort. The existing seats in each of the 48 suites will be replaced, in addition to exterior sliding windows, ceilings and furniture. The public areas will get new paint and carpet. 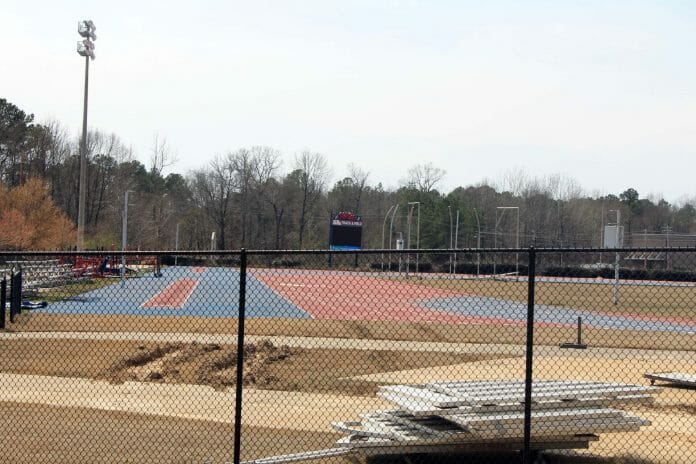 Manning Center Practice Fields: The Manning Center practice field will receive minor renovations in the coming months, including new lights and touchups around the area.

Fraternity Drive/Rebel Drive Connection: The area where Rebel Drive meets Fraternity Row will soon change. A new road addition will extend Rebel Drive to Fraternity Row behind Guyton Hall. The street in front of Guyton, now part of Rebel Drive, will be renamed Guyton Place. This project is expected to begin later this semester and completed by August 2015.

Student Union Expansion: After May Commencement ceremonies, the university will begin a four-year, $50 million renovation to the Ole Miss Student Union. The renovation and expansion will include a larger dining area, new student government offices, a ballroom and conference space, among other amenities. This will increase the building’s size from 97,000 square feet to 157,000 square feet. The expansion will encompass the loading dock area and parking lot. During the expansion, the existing food court will remain open. When the expansion portion is completed in about two years, a new food court will open and the existing one will close. Student Union Drive will remain open during the project, though at times it may be reduced to one lane. The entire project is expected to be completed by May 2019.

University Avenue Bridge: This summer, the University Avenue bridge near Old Taylor Road will be renovated to increase its load capacity. The bridge will remain open to pedestrian traffic and some lanes will be periodically closed throughout construction to vehicular traffic, but it will remain passable. Work is expected to be complete by August 2015.

Kennon Observatory Bus Stop: The bus stop area near Kennon Observatory will be renovated to better handle bus transportation. The renovations will accommodate growth in the transit system and provide a central campus location for drop-offs and pick-ups. The project is expected to be complete by August 2015.

Croft Institute Renovation: Following May Commencement, the Croft Institute will undergo exterior renovations to its brick facades. It is expected to be complete by October 2015.

Physical Plant Department West Addition: In efforts to keep up with a growing campus, the Physical Plant is adding space for its growing staff. A new 5,000-square-foot building will be added to the existing Physical Plant Administration Building and will include additional office and departmental space for the Department of Facilities Planning. This projected will begin in August 2015 and is expected to be complete by May 2016.

Track Facility Restoration: Once storm drainage corrections near the track facility are completed, the track will get a brand new surface. The stands and existing building will remain. This project is expected to begin in September 2015 and be complete by March 2016.

Jackson Avenue Center Phase II Renovations: This project includes renovation of approximately 41,500 square feet of the 95,000-square-foot Jackson Avenue Center (old Wal-mart). This is the remaining area of the building that was not renovated in the 2012 project. The renovation project will provide a new location for the University Testing Center, multipurpose rooms, office space and support spaces. New HVAC, plumbing and electrical systems will be provided, and new restrooms will be constructed to accommodate the occupation of this area. The project will begin in September 2015 and expected completion is May 2016.

Vaught Hemingway North Addition: The north end zone will look completely different by the start of the 2016 football season. Construction will begin in December 2015 and the entire section will be bowled-in with a brick facade. A new scoreboard, measuring 109 feet wide by 49 feet tall, will be installed, and two smaller scoreboards, 30-by-50-feet each, will be added to the south end zone. The addition will increase stadium capacity by about 5,500 seats.

Johnson Commons East Renovation: Johnson Commons East building will receive a full exterior and interior renovation. The upper floor will continue to be used for banquet and large meeting spaces. The lower floor, formerly Human Resources Department, will be renovated to house the Center for Excellence in Teaching and Learning. Construction is anticipated to begin in spring 2016 and be complete by spring 2017.

New Science Building: Last year, Ole Miss received a $20 million lead gift from the Gertrude C. Ford Foundation for a new science building. The $100 million building will be added along Science Row between University Avenue and All American Drive, with construction expected to begin in early 2016 and be complete by August 2018. The building will include about 200,000 square feet for research and education efforts.

Garland, Hedleston and Mayes Renovation: Garland, Hedleston and Mayes halls were built in 1938 as men’s dormitories. These three Neo-Georgian buildings sit empty in the west-central part of campus. They are strong examples of their architectural style, but housing needs have changed, and their low floor-to-floor heights and tight structural bay sizes make them unsuitable for modern needs. Although not viable for housing, they remain appropriate for academic or administrative use. While the interiors have deteriorated, they are structurally sound. The project will completely replace the mechanical, electrical, fire protection and plumbing systems and reconfigure the space to support the needs of the School of Applied Sciences.

The University Museum is working on repairs to Rowan Oak and the Walton Young House. Rowan Oak will be repainted in areas and undergo some exterior repairs. The Walton Young House will also be repainted. Roofs will be replaced on both the National Center for Physical Acoustics and the Turner Center, and the ventilation system will be renovated in Meek Hall. All these projects are underway.