University of Mississippi Polls Students For New Restaurant on Campus 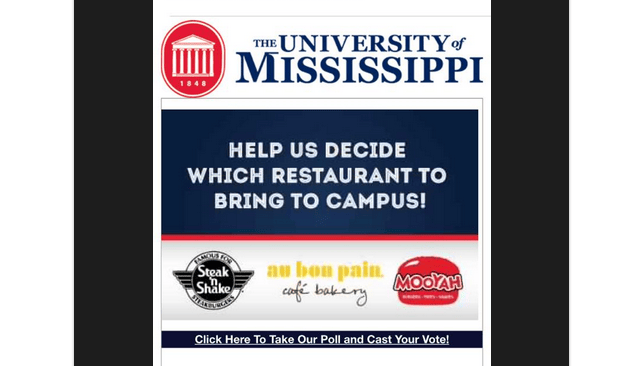 University of Mississippi sent out an email today that caused a stirring in the student body: a poll for three restaurants the university could bring to campus.

Steak n’ Shake was founded in Normal, Illinois in 1934 on a concept of premium burgers and milkshakes. Now it has a full menu from breakfast to all-nighter meals. It is well-known for its steakbugers and steakfranks (hotdogs).

Au Bon Pain: Café Bakery is an award-winning nutritional kiosks that observes healthy eating. It is one of the first cafés in United States to list calorie counts on its menu. The Health Magazine has listed it as one of America’s top 5 healthiest restaurants more than once. The café serves sandwiches, soups and salads as well as hot breakfast plates.

MOOYAH is a newer fast food burger restaurant based out of Plano, Texas, where it first opened in 2007. By this year it is on track to have 100 restaurants open in United States. Its menu is expansive with food items like sweet potato fries and turkey burgers alongside a build-your-burger option.

Callie Daniels is a staff writer for HottyToddy.com. If you want to treat her to her first-ever Steak n’ Shake lunch, her email is callie.daniels@hottytoddy.com.