Mo’ about Joe: Charleston’s Own Joe Wrenn Answers His Calling 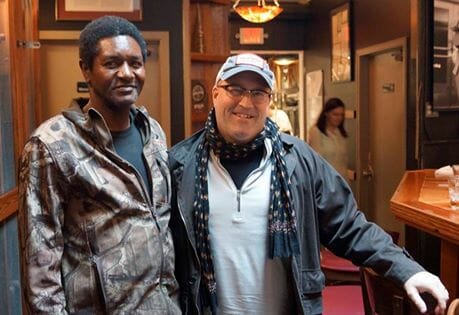 Joe Wrenn lives out in the country of Tallahatchie County, about five miles from Charleston, Mississippi. He is a product of country life, taught and trained by his maternal grandfather and uncles to live off the land. He is of his environment. He is carved of dark wood, molded from gumbo and clay, and seasoned with the blood of wild animals. He still celebrates “hog killing” days. He builds his own cabins, studios, fences and barns. 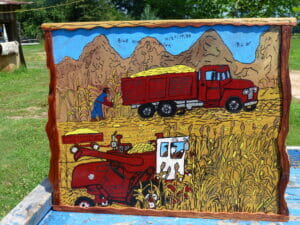 He paints from visions and memories. Wrenn has been drawing, carving and painting all of his life. Tell him of your “place” and he draws it as you “tells” it. Written by Glenna Callender and used with her permission…

God-given talent isn’t something you waste; you might procrastinate a few years (or more) before you really start developing it, but you don’t ever waste it; Wrenn is proof of that. And as people watch “Mo’ Bout Joe” in the upcoming documentary of the same name, that proof will be obvious.

Wrenn was born and raised in Charleston and could be described as a ‘natural artist.’ His genius and mastery with canvas and paint is something unexplainable as he’s never had lessons or instruction of any kind to help develop his skills. Wrenn’s primitive and earthy pictures are from his heart and soul and his artistry self-taught over the years.

Glenna Callender is the executive director of the Charleston Arts and Revitalization Effort (CARE.) in Charleston, Miss. Callender and others in the CARE family discovered Wrenn’s talents about a year ago and held his first art exhibit in their CARE gallery.

“And when I use the term discovered; we all knew about his talents” Callender said, “Joe has painted all of his life, but this was his very first exhibit. It’s very interesting because he’s also a deer-skinner and a preparer of wild game for people all over the community. He’s very busy during the winter months with all kinds of wild game and he’s a hunter himself, a fisherman and a horseman. In fact, we tease him all the time about being a horse whisperer. But his paintings are masterful.”

Callender said that she had been trying to get Wrenn to do an exhibit for several years and display his work during hunting season. She’d also tried to pair him up with several authors who had written hunting books based on experiences hunting in Tallahatchie County, but the time was never right for them to get together.

“But my son Chris hunts here in Tallahatchie County,” she said, “and his hunting camp was filled with Joe’s primitive artwork already, which is all just really interesting and fun. So, he and his fellow camp members helped me talk Joe into an art exhibit. We really didn’t have to do a whole lot of talking; he’s very happy to tell stories about his work and show it off.”

Callender said they decided on a one-man show, which they had never done before in Charleston.

“We had his first art exhibit in March 2014,” she said, “and normally we have anywhere from four to six artists on display just to have a nice crowd, but Joe’s artwork drew over 100 people and two-thirds of his artwork sold before the exhibit was taken down.” 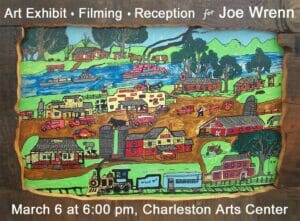 After that, Callender said she got in touch with someone who had always supported CARE and the city of Charleston and who recognized talent when he saw it, Dr. Ed Meek.

“I called Ed and he called some of his friends because Ed is not only a friend to Charleston and a friend of mine,” she said, “but he recognizes talent when he sees it. He came and looked at Joe’s work and bought several pieces and even commissioned a few too. He then called his friends and they came and looked at Joe’s work and bought pieces as well. It was then that talk about having Joe do an exhibit in Oxford began to happen. So, in September 2014 we held an art exhibit and reception there at the Powerhouse. It was amazing.”

Meek said he was honored to own pieces of Wrenn’s artwork and to play even a small part in the film being made about the extraordinary artist.

“I am flattered and honored to be a part of the documentary being made on the life and work of self-taught artist, Joe Wrenn of Charleston,” Meek said. “Another Charleston son, Morgan Freeman, provided the funds to the Charleston Arts and Revitalization Effort (CARE) which is producing the documentary. CARE “discovered” Joe whose work is being well recognized. HottyToddy.com has been a partner in promoting Joe and his work. A number of Oxford residents have purchased his work and I think he is really going places.”

Callender said the Oxford exhibit for Wrenn did extremely well, with much of his artwork selling that night.

“It was only one night,” she said. “And it was sort of in conjunction with Thacker Mountain and so we had Bill Abel play for the reception. Wayne Andrews at the Powerhouse was just wonderful and so much help with all of this. A lot of Joe’s work sold that evening.”

Wrenn’s work is also displayed in high profile places like City Grocery, one of John Currence’s restaurants, and has been selling wonderfully.

“It’s literally been flying off the walls at City Grocery,” Callender said. “He has artwork in Boston, California, Arkansas, Georgia and New York. It’s just been unbelievable. And it’s all because of Joe’s talent; it’s so fresh and honest. He paints history and he paints memories and it really touches the heart.”

Callender said all of these moments spent with Wrenn and his wife gave her an intense feeling that his amazing story needed to be told, in one forum or another. 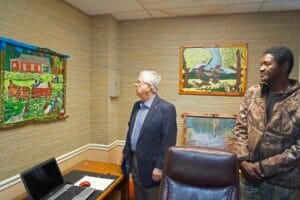 “The more I had gotten to know Joe,” she said, “the more I realized that the man is a story. Until you meet him and go to the place where he lives, you don’t get the full feel of the man and his life. He paints and skins and guts his deer, all in the same shed he built himself. Joe is the type of person that you could drop anywhere, any wilderness, and he’d survive. He knows what to hunt, where to find it, and he knows herbs and grasses that not only heal, but are edible as well. He knows how to cook and season it. He’s never been able to afford a veterinarian, so he’s been the vet to all his animals. He also trains horses very well. He actually trained one to dance and sold it to Morgan Freeman.”

Callender said the more she learned about Wrenn, the more she felt that a documentary on him and his life was the appropriate vehicle to tell his story.

“I looked at several documentaries that friends of ours at Barefoot Workshops had made,” she said. “And I knew that Joe was not only a primitive, self-taught artist, but he also had a tremendous amount of personality and a definite story to tell.”

Callender said that CARE had received some money from Morgan Freeman for their second film festival in Charleston and the committee looked at all of the films out there and didn’t feel any of them would draw and hold a Charleston audience.

“I contacted Morgan and asked him what he thought about us making a documentary with the money he gave us,” she said. “And Morgan said whatever we wanted to do was fine. So, we chose to do a documentary on Joe.”

Callender said she first got in touch with John Allison, son of musician, Mose Allison, about doing the film.

“I talked to John and told him that I thought we could do this documentary,” she said. “And John said that he would get in touch with Tim O’Grady, a filmmaker out of Tucson, Ariz. and see when he could come to Charleston.”

So, with Freeman sponsoring the documentary and Allison and O’Grady filming it; Callender assisting and supporting the film, the trio began the project, Mo’ Bout Joe. At present, they have about three-fourths of it completed.

Callender said the documentary so far has wonderfully real moments of Wrenn’s life, from him painting to going to church.

“We even have a hog killing,” Callender said, “and Joe working with his horses. We tried to change locations and capture him as himself in every area of his life, Joe’s very earthy and a product of the land. And we hope the film portrays that characteristic.”

And when Callender asked Wrenn how he felt about his newfound success and recognition, and whether he was happy with his sudden notoriety, she said he just laughed and said:

Mo’ Bout Joe is still in production. To keep up with the film’s progress, you can follow CARE’s Facebook page.