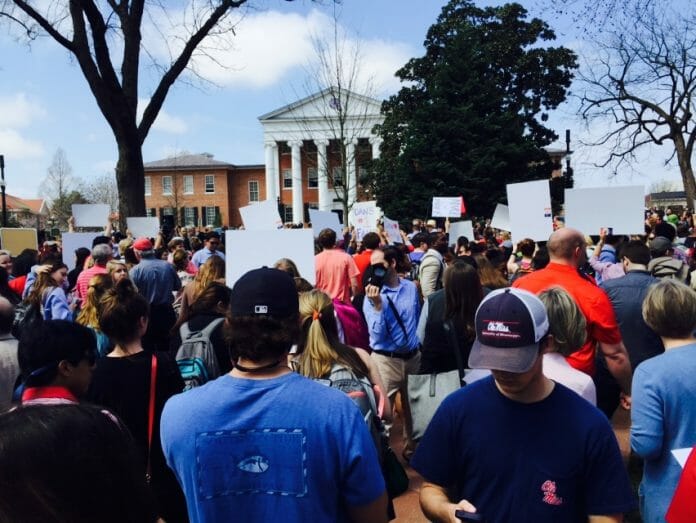 Today at noon, students at the University campus held an “I Stand With Chancellor Jones” rally in the circle in front of the Lyceum.

The rally was in protest to the state’s Institution of Higher Learning board of trustees’ decision to not renew Dr. Dan Jones’ contract, which was announced this past Friday, March 20. The event was informative with an organized schedule that included an ASB statement letter reading and a speech regarding the UM creed. 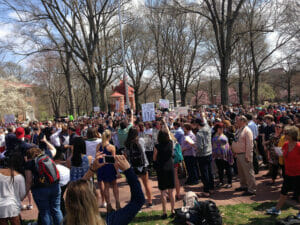 Each speaker was remarkable, but possibly the most exciting part of the rally was the crowd’s participation.

The students in charge of the rally, after an opening statement, first asked attendees to recite the UM Creed, which was provided on a bulletin that was handed out upon arrival. The feeling of pride from students, faculty, and alumni and Oxford residents was apparent as the words “I believe in fairness and civility” echoed throughout the circle.

Led by students, the crowd then excitedly chanted, “Doctor Dan, he’s our man, we won’t let this decision stand!” and “We stand with Dan!” The energy and passion in the air was palpable. Oxford residents, students, and alumni all cheered loudly with bright smiles on their faces. After followed a singing of the Alma Mater that had some at the rally in tears.

It was clear that every attendee, all 2,500 of them, believe in Dr. Jones. They are passionate about doing their part to reinstate him as chancellor of the University of Mississippi.

The rally organizers wrapped up the demonstration with a question: “Are you ready?”

Miller Hollingsworth is a staff reporter for HottyToddy.com. She can be reached at mmhollin@go.olemiss.edu.