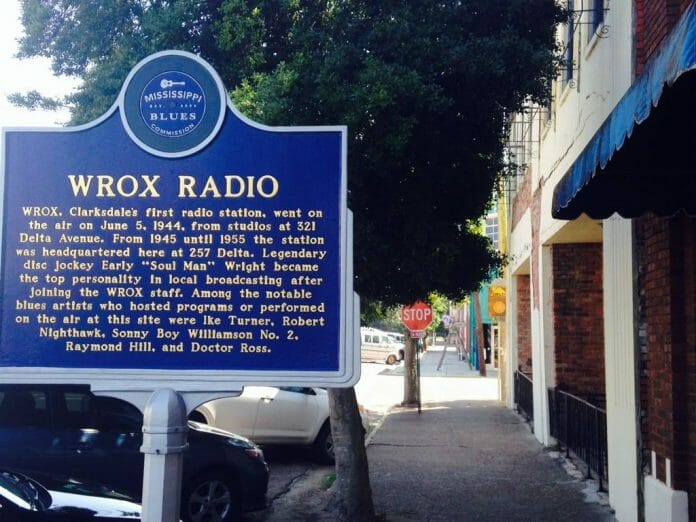 On June 5, 1944, Clarksdale’s WROX went on the air with its first broadcast. At that time the station’s studios were located at 321 Delta Ave. In 1945, the station moved its headquarters to 257 Delta Ave., where today the WROX Museum, housing memorabilia of the station’s early days, is situated. A Mississippi Blues Trail marker sits proudly at this location, signifying how important the station was and is to Clarksdale and the Mississippi Delta.

WROX has had a rich history, with everyone from Ike Turner to Elvis Presley having performed there over the years. Early Wright was WROX’s first African American announcer and became known as Early “Soul Man” Wright when he was spinning blues and R&B, and “Brother Early Wright” when he switched back over to gospel. His show was so popular that he continued to broadcast with the station until 1998.

Today WROX is owned and operated by Paul Wilson and his wife, Bobbie. They bought the station in 2011 and brought it back around to local programming and local involvement and interaction.

“In the late 40s and the years after World War II,” Wilson said, “there was just a proliferation of radio stations all across the country, mostly in small towns. WROX was the first station in Northwest Mississippi to sign on. We actually predated WDIA in Memphis by a few years and came a few years after KFFA in West Helena. We signed on in June, 1944 with 250 watts of power, which at the time, was a fair amount and the signal went a long way. The station moved over to 257 Delta in 1945 and that’s where Bubba O’Keefe has the museum today and the Mississippi Blues Trail marker is as well.”

Wilson said that in the mid-50s the station moved into the Alcazar Hotel, where it was on the 2nd floor for well over 40 years.

“After that,” Wilson said, “it bounced around to several different locations until finally settling into our current physical location on DeSoto Avenue, a couple of blocks north of the Crossroads in about 2005.”

As for the original owner, Wilson said that Birney Imes Sr. was the first and after that the station passed through many hands.

“The original owner was a man by the name of Birney Imes Sr.,” Wilson said. “It progressed through a series of owners and managers, probably the most famous manager of the bunch would have been Tom Reardon, who was manager here in the 70s and 80s.”

Wilson said that over the years the station mirrored the format and the culture of the day.

“It was a mutual broadcasting affiliate initially,” he said. “It carried Steve Allen and Kate Smith, the Lone Ranger and all the programs that were on radio at the time. As those programs moved to television, most stations began playing records and doing local programming and WROX did too. By the 70s, it was a Top 40 station, in the 90s it was a talk station and it has evolved over the years.”

Wilson said that at the time he and his wife bought WROX, the station had been through many formats without a whole lot of success.

“Since the mid-2000s, the station had been playing a full-time blues format and that just wasn’t profitable,” he said. “And then they went back to a more standard oldies format. The owner then went through a progression of managers that didn’t particularly do well. And by the time we bought it, the station was simulcasting a country station out of Cleveland and had literally disappeared from the community’s radar.”

Wilson said that he and his wife both saw the need for a locally-programmed and locally-involved radio station and thought they could bring back WROX’s heyday.

“I’d been in this business for a long time as a jock and as a program director and manager,” he said. “And my wife had had agency sales experience and customer service skills and we just thought we could make it work. We’re not looking to get rich, we just want to make a living and provide a service to the community and I think we’ve managed to do that over the past three years.”

Today, the music played at WROX reflects a more rhythmic style of oldies.

“It’s what would be described in the industry as jammin’ oldies or rhythmic oldies,” Wilson said. “Music from the 70s, 80s and 90s, such as Lionel Ritchie, Michael Jackson, Diana Ross, Gladys Knight & the Pips — basically it’s the same era of music you hear on Max 99 out of Greenwood, only they have the tendency to lean pop, while we play a bit more urban. We also throw in a fair amount of blues with one song every hour and a whole block of blues programming on Saturday night.”

Wilson said the music being played was all his. He developed the lists and literally loaded every song into the computer. When he started programming blues, Wilson said the songs already there were very white and pop-friendly music with a more mass appeal.

For the station’s 70th anniversary, Wilson said that in June WROX put on a concert and a fireworks show in the new Martin Luther King Jr. Park, which was funded by Southern Bancorp.

“Clarksdale, like a lot of Delta cities, hasn’t had a public 4th of July fireworks celebration in a lot of years” Wilson said. “And that was something that we felt we wanted to do, so we found the money from sponsors and put the deal together. Fourth of July fireworks displays are prohibitively expensive and in high demand on or around the 4th, so we backed the date up and had it a week before the 4th, the last week in June, which coincided beautifully with the radio station’s 70th anniversary.”

The legacy of WROX is certainly something worth celebrating, with many celebrities having stopped by to visit over the years. 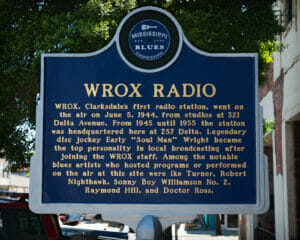 “Elvis Presley visited for one, when he was really an unknown,” Wilson said, “and the station being 70 miles outside of Memphis, came down to WROX quite a bit. He was also interviewed by Early Wright here at the station at one point. Ike Turner, who was from Clarksdale, started working at the station when he was in high school as a janitor. Early kind of took him under his wing and Ike eventually got an on-air slot before he went off to form The Delta Cats with Jackie Brenston and become a big star. But he would come back and hang out and sit with Early. Bobby Rush was here a number of times and the list goes on and on.”

Wilson said at one point in the late 40s and early 50s, for a number of years WROX was simulcasting King Biscuit Time with KFFA.

“And sometimes they would originate the broadcast from Clarksdale,” Wilson said. “Sonny Boy Williamson and his group would actually play here and they would send the broadcast over phone lines back to Helena. And there was kind of a Delta network between those two stations for about eight or nine years. Historically, it was really an amazing time.”

Angela Rogalski is a HottyToddy.com staff reporter and can be reached at angela.rogalski@hottytoddy.com. This story first appeared in the Delta Business Journal, a publication owned by HottyToddy.com contributor, Scott Coopwood.