Over 100 people attended the kick-off meeting for Vision 2037 — Oxford’s Growth & Development Plan Tuesday at the Oxford Conference Center. The project is being implemented to assist with the energetic growth the city is experiencing and carries the moniker “Vision 2037” in preparation for the city’s upcoming Bicentennial.

The Board of Alderman appointed the Orion Planning Group of Hernando, headed by Bob Barber, in January. Barber brought together a team of professionals to present their preliminary ideas about the Oxford expansion. The kick-off meeting’s intention was to open a dialogue over needs and areas between the planning consultants and concerned Oxford citizens.

The team includes Barber, the prime consultant, Lee Jones, owner of Third Coast Design out of Nashville, Randall Gross, a development economist, Wade Walker with the engineering firm Alta Planning and Design in Davidson, N.C., and Phillip Walker, owner of The Walker Collaborative, a planning practice in Nashville that has been involved in many urban development projects and historic preservation efforts across the spectrum. The group had been in Oxford for several days to study the city and formulate a strategic plan to begin the planning process of the expansion. 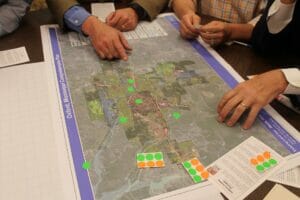 “We are having this town hall-type, kick-off meeting of the planning process for the city of Oxford,” Barber said. “We’re opening up the conversation tonight about the future of the city and looking out toward the Bicentennial, which will be in 2037, to address the potential growth the city may experience.”

Mayor Pat Patterson gave the crowd a warm welcome, then turned the floor over to Barber and his team.

Each consultant presented their points of interest with Powerpoint presentations. Some of the highlights were: 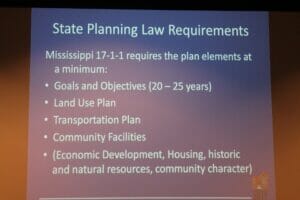 The planning process will have a four-step approach: discoveries, direction, design and determination, with the prerequisite that design is not “one size fits all.”

Each area of the four steps were presented by the individual consultants and the crowd, all seated at tables with land use maps of the city of Oxford before them and a stack of sticky orange and green dots, had an opportunity after the presentations to use the maps to place their “loves” and “cautions” upon the maps to be saved and used by the team as the planning process goes forward. The orange dots represented people’s cautions when it came to areas of the city people were concerned about during the expansion, and the green dots showed particular points of interest that people love about their city.

Some of the loves the crowd designated unanimously were the Square, the University of Mississippi, city parks and the Oxford Commons community project.

Cautions included the West Jackson Avenue area, where most people stated crossing on foot and keeping your limbs intact was almost impossible due to the congested traffic problem, roads around the city that don’t connect, the overcrowding problem on Old Taylor Road and the need for affordable housing in the city of Oxford. Displacement of residents during the actual development phase of the effort was also a concern.

The team listened to citizens’ concerns and kept the maps and any notations made on large scratch papers (also provided at the tables) for their future reference when it came to making definitive expansion plans.