Realizing a dream isn’t always easy — in fact, sometimes it’s downright impossible. Or is it? What if the passion you had for that pie in the sky idea could carry you all the way to fruition, to the point where you can almost taste that elusive, creamy dessert that is your dream and actually slice it up onto your plate and enjoy it?

Lauchlin Fields knows something about that kind of passion. Not only is she reveling in her own pie-filled plate experience these days, she’s actually savoring it on a quarterly basis.

Fields is publisher and editor of the supremely popular magazine called “The ‘Sip.” Deeply rooted in the beauty and uniqueness that is Mississippi, the lifestyle magazine is a perfect complement to a woman who believes in the allure and captivation of the written word.

Fields came to the world of journalism via a degree in Southern Studies. She graduated in 2003 from Ole Miss, the same year her father died, and decided to move back home to Clinton, Miss. that summer after graduation.

“After my dad died, as much as I loved Oxford, it was important for me to go home and be with my mom,” Fields said. “I’m the youngest of five children and being with my mom at that time was just something that I wanted to do.”

While she was a student at Ole Miss, she had worked at “Living Blues” magazine, which is published bimonthly by the Center for the Study of Southern Culture, and it was there that she got her first taste of her childhood dream.

“I didn’t do anything editorially while I was at “Living Blues,” she said. “I answered phones and dealt with circulation, but I knew I had a bug to write and write for a magazine. While I was at home with my mom for a couple of months, I was looking for a job and trying to figure out what I wanted to do with my life from that point, so I reached out to a lot of magazines in Mississippi to see if they might have a place for me.”

Fields said that she did hear from “Mississippi Magazine” and they offered her an internship. She accepted and interned with them that fall for a short while. Her journalism career really kicked off when she got a job with The Vicksburg Post.

“I became a reporter for The Vicksburg Post,” Fields said, “and I worked there for five years. It was a complete eye-opener for me because I had never taken any journalism classes or really worked as a professional writer anywhere. I’d had the internship with “Mississippi Magazine,” but that wasn’t anything to give me the real-world experience a newspaper does.” 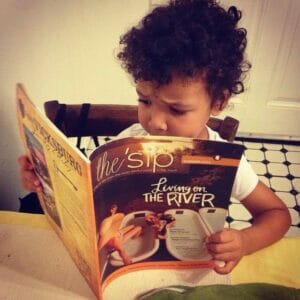 Fields said that she was hired at the newspaper as a features writer and her first assignment was to write a story about a woman who was turning 100-years-old and lived in a nursing home.

“The lady unfortunately couldn’t speak,” she said, “so my first assignment was about someone who really had no way of communicating with me at all. From there, I got the opportunity to do a lot of really good human interest stories and then I covered crime and all the different sections of the paper. I learned so much working there and not just about writing, but about people and life in general.”

After five years, Fields decided that it was time for a change; working all the weekends and answering all the demands of a city reporter had begun to wear on her. And she wanted to get back in touch with her more creative side.

“It was then, in 2008, that I got the opportunity to run an art gallery in downtown Vicksburg, the H.C. Porter Gallery,” she said. “H.C. Porter is a Mississippi artist and it’s her signature gallery. I did all her marketing and began to do design work for her as well. She would do the art and I was running the gallery.”

Her experience at the gallery gave her a view of the creative and business side of a venture, something that would come in handy when she started her own endeavor.

It was then that the managing editor off The Vicksburg Post reached out to her about coming back, only in a completely different role.

“She asked would I be interested in being sole writer for a publication they were going to do called “The Vicksburg Impressions,” which was to be a little features-type magazine that was quarterly and ran a few stories in each issue,” Fields said. “Instead of hiring a staff writer, they asked me to freelance for them. I was really excited, because I really did miss the writing part of what I used to do.”

Fields kept her job at the gallery and worked at “The Vicksburg Impressions” on the side. She wrote for the magazine for about three years, during which time she had her son, Grady, who she took with her on assignment.

While she was still at the gallery and “The Vicksburg Impressions” job, Fields had been doing a lot of graphic design, since her job at the art gallery required her to hone up on her designing skills. And people were coming to her with design job offerings.

In 2012, she started her own graphic design and marketing company called Front Porch Fodder, which she still owns today. It was right after she started her design company that the childhood dream of words on a magazine page began to haunt her sleep again.

“I just knew that I could do it,” she said. “And with a lot of help from a lot of people, including Melanie Thortis, the photographer that I work with now on “The ‘Sip, I started the magazine. Right now, it’s free to the public and can be picked up at specific locations.”

“The ‘Sip” has been in publication now for almost a year and Fields said that while there were a lot of great magazines out there, with “The ‘Sip” she tried to bring something different to the table with stories that didn’t necessarily focus on the social scene or weddings and all the other topics that were already being done by hometown magazines.

“The ‘Sip is a grassroots movement – homemade by people who love Mississippi and have a great talent for telling its stories through photos, words and design – the faithful trinity,” Fields said. “It’s taking all of the great things that we have here in Mississippi and celebrating them.”