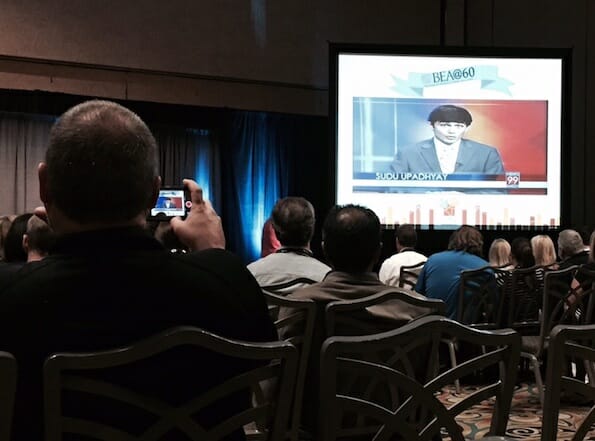 The Meek School of Journalism is flying high for a couple of different reasons.

First, the student-produced NewsWatch 99 broadcast took home an honorable mention at the Broadcast Education Association (BEA) competition in Las Vegas this week. According to NewsWatch 99 advisor Dr. Nancy Dupont, a 4th place showing in the national contest is the highest ranking the program has ever received.

In addition to the broadcast honors, Dupont and Prof. Deb Wenger presented in multiple sessions at the conference, moderating or participating in panels on using audience analytics in teaching to job hunting for broadcast students.

Journalism students and NewsWatch 99 managers Browning Stubbs and Sudu Upadhyay also traveled to Vegas for the conference. BEA meets annually with the National Association of Broadcasters (NAB) because that group brings in more than 100,000 attendees who showcase products and demonstrate techniques affecting the radio and television industries.

Upadhyay and Stubbs hit the convention floor to evaluate the latest in broadcast technology, which they hope to leverage in an effort to bring home a first-place award for student newscast in 2016.