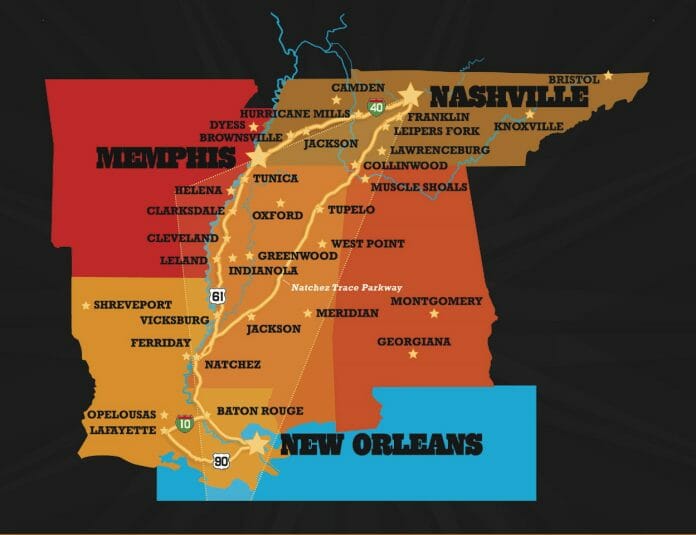 This past week, the state received word that the new Americana Music Triangle was officially being kicked off. This has been in the making for the past few years.

Founded by Nashville preservationist and entrepreneur, Aubrey Preston, the music triangle will include more than 30 communities along what they are calling the “Gold Record Road.” The pathway consists of Highway 61, the Natchez Trace I-10, and Highway 90.

According to the press release, “…the Americana Music Triangle is a milestone collaboration of cultural attractions across the South. The ambitious project marks the culmination of more than three years of work by a multi-state team of historians, musicians, tourism professionals and digital media experts. The mission: Launch a global grassroots movement for American music tourism and build an online community dedicated to the Triangle’s culture and history. An online ‘webguide’ establishes the Triangle’s digital footprint. Social media channels will educate and inspire a global audience with an online marketing campaign. Collateral materials and merchandise will be distributed in partnership with state and local tourism agencies across the region.”

The bottom line these folks are pushing: America’s music was created in this “triangle” that runs from Nashville to Memphis, down Highway 61 through the Delta to New Orleans, back up to the Muscle Shoals, Alabama area and then back to Nashville.

While this history means much, the main point I took from this grand announcement is that this triangle will be promoted to the world — more people will hear about Mississippi and will want to come visit us.

What isn’t clear to me is how all of this will be funded. Will chambers, counties, CVBs and the states ante up in order to fund all things associated with this new entity?

In any event, I have met Preston and he is a proprietor of Nashville’s RCA Studio A where Elvis and so many others recorded their hits. Preston says in the press release, “With focused online outreach, we can reach countless music fans worldwide and motivate them to visit the Americana Music Triangle. The Triangle is a unique destination where history made music, then music made history. There’s no other place like it in the world”

“Mississippi is the heart of the Americana Music Triangle, so the launch of the AMT web guide is a very exciting event for us,” said Malcolm White, director of Mississippi tourism department. “Our country’s musical tradition was shaped and molded by the talented people of our state and the surrounding region. We not only have marked music trails telling of musical legends, their influences, and the history of the area that gave birth to the blues, but we also make sure music remains a large part of our culture. We are so happy to have AMT’s assistance guiding people as they experience the rich American music story.”

Scott Coopwood, a seventh generation Deltan, lives in Cleveland, Mississippi, with his wife Cindy and their three children. Scott is the publisher and owner of Delta Magazine, one of the South’s leading lifestyle publications, the Delta Business Journal, the first business publication in the Mississippi Delta; and Cleveland’s weekly newspaper, The Cleveland Current. Scott’s company also publishes two weekly e-newsletters. Coopwood publishing concerns now reach 250,000 people.  Scott is also a 1984 graduate of the University of Mississippi. He can be reached at scott@coopwood.net.