Free Screening of Award-Winning ‘DamNation’ May 12

The film DamNation will be screened for free at 7 p.m. Tuesday, May 12. The event is co-hosted by UM Environmental Studies Minor, Office of Sustainability, Oxfilm Society, Southern Documentary Project, Yoknapatawpha Arts Council and the Stubblefield family. 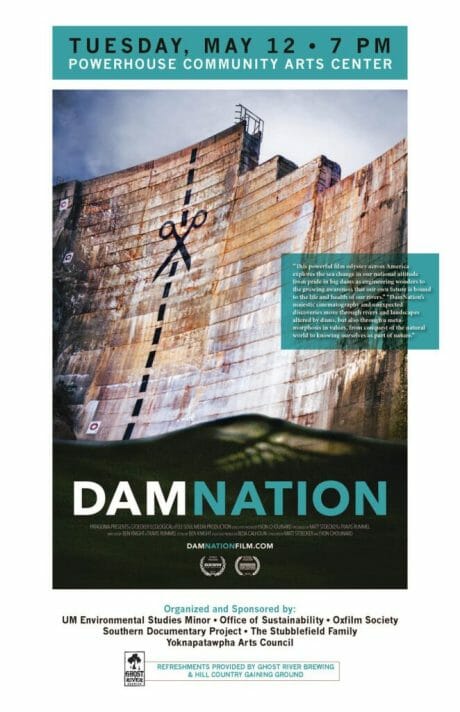 This powerful film odyssey across America explores the sea change in our national attitude from pride in big dams as engineering wonders to the growing awareness that our own future is bound to the life and health of our rivers. Dam removal has moved beyond the fictional Monkey Wrench Gang to go mainstream. Where obsolete dams come down, rivers bound back to life, giving salmon and other wild fish the right of return to primeval spawning grounds, after decades without access. DamNation’s majestic cinematography and unexpected discoveries move through rivers and landscapes altered by dams, but also through a metamorphosis in values, from conquest of the natural world to knowing ourselves as part of nature.

The film won the audience choice award at SXSW in Austin this year. More information and the trailer can be found at the film’s website.

With the Pearl River Dam Project occurring, the documentary is especially timely to bring to Mississippi. The project inspired environmental activists to name the Pearl River one of the most endangered in the country in April, according to the Clarion-Ledger.

Refreshments will be provided by Ghost River Brewing and Hill Country Gaining Ground. The event is free.