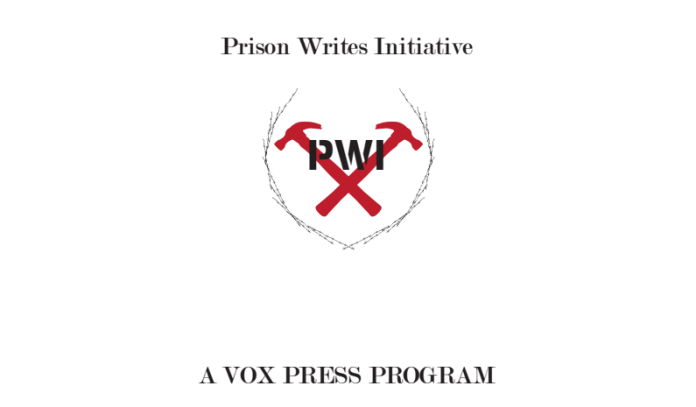 VOX Press‘ book, Prison Narratives, features personal stories written by prisoners at Parchman Farm. Here a couple stories from the book by Vincent Young. The book can be bought here.

Vincent Young was raised on a farm in New Albany, Mississippi. His father was an airplane mechanic and sometimes bare knuckles fighter. He is serving a life sentence for armed robbery and aggravated assault.

My daddy and I became closer after that day at the sale barn. He’d always taught me about fishing, hunting, and how to defend myself, and he even took me with him to his work sometimes. My father was an airplane mechanic at a nearby small airport. I didn’t know that airplanes were so big. I’d never seen them up close, only in the air and on the T.V. Most of the day all I did was walk around and look at them, climbing up on them to look inside. They looked funny inside because the control panel had more monitors than a car’s dashboard and the plane’s steering wheel was only half of a car’s wheel. Some had two seats and some had four. I soon found out that my father was a pilot and he knew how to fly the planes that he worked on. He asked me, “Do you want to fly with me?” I said, “Yes!” and “No!” at the same time. I knew I had to go with him because I wanted to know what it felt like to fly! I must tell you that I’d tried to fly, jumping off chairs while flapping my arms like wings, or jumping off the porch with a sheet tied around my neck. My most daring, and dangerous, attempts were made by running real fast and diving into the air, thinking that I’d take to the air and fly! All I ever got from my tests of flying were skinned knees, elbows, my chin, and a hurt pride. My father offered me the chance to really fly and I took it! He put me in the seat and buckled me up. I’ll admit that I was a little scared, but I’d dreamed about flying and tried to so many times that I couldn’t pass up the chance to do it for real. “I’m with my daddy so what could go wrong,” I thought. Daddy started the engine which was very loud to me, and he yelled, “Here we go!”

I felt the plane turning, but he wasn’t turning the wheel, only stepping on pedals that looked like brakes. We started moving down the runway very fast and when we were close to the end he pulled back on the wheel and off the ground we went! That rising motion made my stomach feel queasy, but once we leveled out I felt alright. At that moment, I wanted to be a pilot like my father. He told me to look out the window, and when I did I could see for miles and miles. Everything on the ground looked so small to me. The sky was beautiful with the sun shining brightly. I saw cars on the roads that looked like ants, and houses that looked like playhouses. I wanted to stay in the air forever.

The only discomfort I had was the take-off and the landing, with the landing most of all because then the plane would bounce. I found out why my father was a great airplane mechanic. It was because he was also the tester of his work. Every plane he worked on was flown by him first. “Who are you talking to?” I asked him. “That’s the control tower, Vincent.”

My legs felt funny when we were back on the ground, but I didn’t care. I was ready to go back up! I couldn’t wait to tell Mattie when we got back home. She didn’t believe me, so Daddy told her that she can go with him tomorrow. I couldn’t sleep at all that night, like a kid on the night before Christmas. But you already know that you always fall asleep before Santa Claus comes to your house.

Daddy woke us up very early so we could be ready to go with him. As Mattie and I ate our breakfast we could hear Mommy fussing at our daddy. I couldn’t make out what she was saying to him, but I knew it wasn’t good. We left the house with Daddy after we’d finished eating, and on the way to the airport he told us that today would be our last day going with him because Mommy didn’t like being home alone.

I showed Mattie the plane Daddy and I flew yesterday once we arrived at the airport, but then we took a different plane. This one was painted orange and white. We got into that one, and when we started down the runway my sister grabbed my hand and squeezed it tightly. I knew she was scared. I was too, my first time. Her holding my hand was her sign to me that she was afraid, but she was alright once we leveled off. Just like me she was amazed at how things looked from the air, how beautiful was the sky, and how bright was the sun.

Our daddy never took us to work with him again, and yet that didn’t end my desire to fly. I did the next best thing. I built my own airplane. Daddy and Mattie gave me a lot of help, mostly daddy when he got off work early. Three weeks later we had our airplane! It was made of wood and big enough to ride in, only it had no motor, so we had to push it, making the airplane sound with our mouth which was okay. Daddy even had it painted orange and white, with three tires, two in the front and one in the back. My Daddy can build most anything made out of wood. Mattie and I played airplane for many years to come.

I’ve still got a year before I have to go to school. Home schooling is getting harder, especially reading out loud, because I still had a stuttering problem. My sister and I had our own sign language that we’d used for years because of my stuttering. When I’d get excited I’d stutter even worse. Certain words, like those that began with a “W”, would be difficult to say.

One thing I did have was girlfriends, although I couldn’t speak with them without stuttering. Because of that I said little to them. Maybe it was because I was the only kid in the area with an airplane.

Things weren’t too good for me as an eight-year-old. I was always in a fight with someone over girls, or if they were mocking me. I always seemed to win. That’s because my Daddy taught me how to fight. I learned later, as I got older, that my daddy whipped a lot of the other daddies in the area. That might be why I had so many fights! Their sons wanted revenge because my daddy beat up their daddy. My Daddy did teach me one other thing: never be afraid of anyone, and so I became pretty good at fighting.

The fights I got into were with much older boys. My sister would always try to play doctor and patch me up before going home because we both knew how Mommy would fuss at me.

One thing I can say is that I only got one whipping at home for fighting. I heard Mommy and Daddy talking about me that night, and after that night I never got another whipping for fighting. I saw my Daddy fight only once. It was in our front yard. I remember the man was fresh from another fight because one of his eyes had a black ring around it. My sister and I were outside playing when Mr. Richard came walking fast into our yard and straight up onto the porch, where he knocked on the door. Daddy came outside and made us go into the house. Once inside we saw Mommy looking out the window. I went to the window to see what she was looking at. By now, there were about ten people standing in our yard and looking at my daddy and Mr. Richard. I saw Mr. Richard take a swing at my daddy and miss. Daddy barely moved. He swung back, hitting Mr. Richard in the side of his neck. Mr. Richard stumbled, but kept his balance. Daddy let him regain his footing. I could see my Daddy ready for action with both of his fists balled up. I was amazed at how light and swift my Daddy was on his feet. Mr. Richard was only hitting my daddy’s arms, because Daddy was blocking most of his punches. All of a sudden Mr. Richard nailed my Daddy a good one. The fight seemed to stop. I saw my daddy smiling. I didn’t know why he was smiling, but Mr. Richard began to back away with both his hands in the air as if to surrender. Daddy didn’t accept that and advanced on Mr. Richard, hitting him so hard that we could hear the lick inside the house. Mr. Richard seemed to leave the ground, and the thought of flying crossed my mind. I looked around the yard for my airplane, but Mommy brought my thoughts back to the fight by rapping on the window. Mr. Richard was laid out on the ground, not moving. The other men were patting my Daddy on the back. The fight had only lasted a few minutes. Daddy threw five punches—one neck
shot, two gut shots, one side shot, and the final upper cut. With that one the fight was over.

Mommy went outside, fussing at the other men to leave. They almost had to carry Mr. Richard, but before he left I saw him and Daddy shake hands.

Mommy got on Daddy for fighting in the front yard. She doctored on him like my sister did with me, sticking cotton up his nose and putting some type of meat right below his left eye. Now I see where my sister got her doctor ways.

I never saw my daddy fight again. I knew he was still fighting, because I’d see the cuts on his hands and a few on his face. I’d ask him, “Did you win?” He’d say, “Yes.” I counted eighteen straight times, until one morning when he said, “No. I lost.” I was unsure if that made me happy or sad. I felt somewhere in between the two, because I’d just lost a fight myself to a twelve year old, which was also my first loss. I’ve always heard the saying, “Like father, like son.” That’s just what happened to me and my Daddy. I was sad and happy that he’d lost a fight, because I’d just lost a fight, and I wanted to be just like my Daddy. After he’d told me about his loss I knew that I still had a chance to be like him.

Things changed for me after a few more fights because guys stopped picking on me, although we still fought over girls now and then.

The year was passing fast and soon I’d be starting school. I dreaded that the most. Kids older than me went to an all black school until 1969. I’d be one of the first in our family to go to a black and white school. I was so afraid of that day.