While many University of Mississippi students were jetsetting off to the beach or the mountains, 12 members of the Ole Miss football team were taking a mission trip with coach Hugh Freeze and his family that changed them forever.

ESPN featured the big trip, which was organized by the team chaplain, to help the Haitians get clean water to the community and spend time with the locals. Though conditions were expected to be rough, Freeze and the team were taken aback at first by the extreme heat and conditions.

The temperature never dipped below 80 degrees. The AC would only come on at night, and it would turn back off at 3 or 4 in the morning. There was no hot water and no water safe enough for the players to drink or even brush their teeth with. They had to use bottled water all week. It was a different world than the one they had grown accustomed to back home.

“Whenever we showed up to the hotel, I think some people’s expectations dropped to rock bottom,” defensive end John Youngblood said. 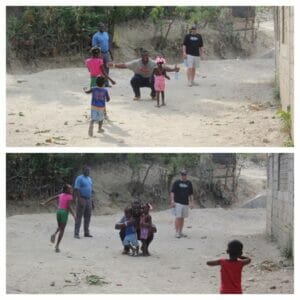 Though Youngblood had been on two previous mission trips to Panama and Haiti with the team, new Rebel quarterback Chad Kelly made the trek only a few weeks into his Ole Miss student career.

“He had a huge heart,” Freeze said. “No one played harder with those kids in the afternoon sessions than him. For four hours in the sun, he never stopped. Very few of us could say that. I’m not one. I couldn’t do it.”

In the end, the trip wasn’t about Freeze or Kelly or Youngblood, it was about a group of young men bonding together in brotherhood over an opportunity to do good for those in need.

Our team laying the 1st stones 4 the reservoir that will provide 1000s of Haitians w/ clean water! pic.twitter.com/3CIqMD7hoz