Bill Hancock led a charmed life. He married his high school sweetheart. He had two successful sons and a beautiful granddaughter. He ran the NCAA men’s basketball tournament. During his ascent through college athletics, he moved among the top sports figures in the world.

On Jan. 27, 2001, everything changed: A small Oklahoma State University plane crashed in a snowstorm. Ten people died that evening, and one of the passengers was Bill’s son, Will.

Bill and his wife Nicki struggled with how to survive the loss; yet, they knew they had to go on living for one another, for their marriage, as well as for their son, Nate, Will’s wife, Karen, and their young granddaughter, Andie.

Bill, who had run 15 marathons, chose to bicycle across the United States in an effort to confront his grief head on. He and Nicki started the journey in Huntington Beach, California, and concluded at Tybee Island, Georgia. Ultimately, the 2,747-mile journey from the Pacific to the Atlantic became something much more important than a cycling trip to help cope with loss — it became a journey in discovery as well as one of recovery.

Riding with the Blue Moth is part memoir, part travelogue and part homage to a son whose life was taken too soon. It is a story of how a person can recover from unimaginable loss and ultimately find peace and stability. Introduced by Ole Miss football coach Hugh Freeze, Hancock will come to Off Square Books in Oxford at 5 p.m. June 2 for a talk and book signing.

On his journey, Bill battled searing heat and humidity, aggressive dogs, unforgiving motorists and dead armadillos. As he rode, his thoughts continued to return to two common points: His son being gone forever and the prospect of how their family would move forward. As he rode across the country on his bike, he named his grief the blue moth riding on his shoulder as he powered through nine different states and landscapes while Nicki drove the highways before him to set up their evening camp sites.

Before he hit the road, some of Bill’s friends suggested he use meditation instead of exercise, some suggested he get back to his job. Bill chose to battle the blue moth like an infantry soldier on a Cannondale bike. 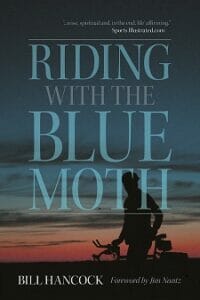 After 36 days traveling through California, Arizona, New Mexico, Texas, Oklahoma, Arkansas, Mississippi, Alabama and Georgia, Bill put his foot in the Atlantic Ocean. He made the journey, and the blue moth remained on his shoulder in the same way his son would always remain in his heart.

Yet, he had made it, both physically and emotionally, and he proved anyone else who has suffered through grief can have the mettle to stand up, dust off and get on with life.

“Riding wit the Blue Moth is pure inspiration. It is a snapshot of American culture. Most significantly, this book offers a poignant, deeply personal and uplifting account of how this family responded to a tragic loss,” Jim Nantz, CBS Sports, said.

Bill is now the executive director of the College Football Playoff, a position he approaches with the zest of a man who cherishes the best life has to offer having experienced the worst.

Riding with the Blue Moth  is an example of how one determined man faced tragedy head on and was brave enough to write about it. His story is an inspiration to all who face the challenge of loss.