One of the staff members of Ole Miss Athletics had a much-needed trip to the Midwest recently.

Cliff McCain works in the Ole Miss Athletic department as a Learning Specialist.

He said, “It was a great trip that was a long time coming.”

He and his wife, Laura McCain, enjoy traveling and have been to the Northeast and West to California and Arizona, but neither of them had been to the Midwest. “We had this trip planned for 2012 but less than a month before we were to go I was diagnosed with Hodgkin’s Lymphoma cancer,” said McCain. “We had to cancel everything. It was very disappointing, but we had no choice.”

He had been at the University of Mississippi in some capacity since August 2012. He began as a tutor and while in recovery from the illness he did part-time work. He said he was fortunate enough to be hired full time as a Learning Specialist two years ago. His wife is a librarian at the Northwest Community College in Oxford and she also helps the Ole Miss Athletic Center a couple days a week with its writing lab that serves its student-athletes.

“All is great now,” he said, “but it took us three years to get back to doing this adventure. For several reasons it was a very special trip to us.”

They began with Chicago where they toured its downtown and visited the Wrigley Field for a Cubs game. They also drove to Evanston to visit the Northwestern University campus as well as later briefly visiting the University of Illinois in Champaign as they headed north.

“It was the childhood home of my wife’s favorite author: Gladys Taber,” McCain said.

They also visited Indiana where they went to two cities: South Bend and Milan. In South Bend, they stayed on campus at Notre Dame and walked around as well as eating at CJ’s Pub in downtown.

“Running early in the morning on campus when it was so peaceful was a great experience,” said McCain. “In addition, I met with the director of the Student-Athlete academic center on campus and toured their facility. We talked about how they do things in comparison to how we do things to help our student-athletes.”

Milan is the town the movie Hoosiers took place in. The McCains visited the museum where they chatted with the museum’s operator who educated them on the movie and the actual events in 1954 that the movie was based on.

Afterward, they visited the Amish country in Indiana, an area not far from Notre Dame. 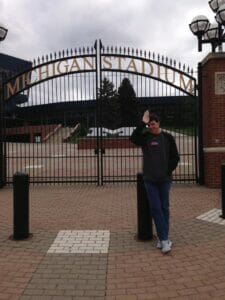 The McCains went to Ann Arbor in Michigan that they felt was similar to their trip to South Bend where Cliff got to chat with the academic support director and one of the learning specialists at the University of Michigan. He didn’t leave the university without a Fins Up!

They also visited Cincinnati in Ohio for a night. The McCains made good use out of their short visit with a downtown tour at the Reds baseball and Bengals football stadiums, stayed on the banks of the Ohio River as well as a quick pit stop at the Bowling Green State University.

In Kentucky, they went to Louisville for twilight horse races at Churchill. They also stayed at the National Park and explored some of the caves at Mammoth Caves before heading home the next day.

Cliff McCain, of course, also answered a fun question whether Ole Miss Rebels could take on some of the football teams from the Midwest. He said, “Oh no doubt. Our speed would be a big difference maker when playing those schools in my opinion.”

This trip was a long time in the making, but we are glad to report that Cliff and Laura McCain, such a deserving couple, have enjoyed the weeklong trip immensely! We wish them a Hotty Toddy summer!

Callie Daniels is a staff reporter and writer at HottyToddy.com. She can be reached at callie.daniels@hottytoddy.com.