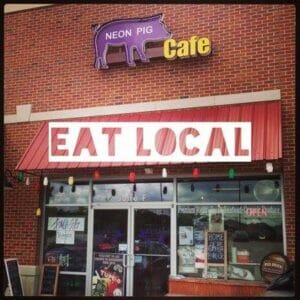 The “smash’ burger from the Neon Pig Cafe in Tupelo officially has been named “Best Burger in America” by thrillist.com, beating out its competition with 56.47 percent of the vote from fans.

The burger was in competition against the “Americana Burger” from Causwell’s in San Francisco, California, which took away 43.53 percent of the vote.

Neon Pig’s famous smash burger is a combination of aged filet, ribeye, sirloin, New York and Benton’s bacon ground together to give a strong, smoky flavor. It is served on a ciabatta bun with bacon bits, cheddar cheese, onion and a special comeback sauce. The success of the smash burger can be credited to the café’s in-house butcher shop, and the Neon Pig Café is the only all-in-one butcher shop and restaurant in Mississippi.

The Tupelo-based restaurant is opening an Oxford location in the former Panini space in the Mid-Town Shopping Center on North Lamar Boulevard. The restaurant is expected to open in October.