The havoc unleashed by Hurricane Katrina was unlike anything the Mississippi Gulf Coast had ever seen. Bridges destroyed. Communities cut off from each other. Lives changed forever. 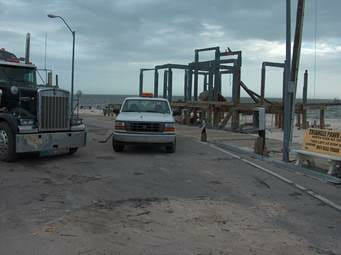 With so many communities along the Coast cut off from each other, the Mississippi Department of Transportation (MDOT) recognized the need to quickly identify and provide solutions that would reconnect the people of South Mississippi.

“The response to Katrina’s devastation included more than the repair and replacement of critical roads and bridge infrastructure,” said Transportation Commissioner Tom King. “Residents of the region also needed access to local transportation options that connected them to destinations such as work, health care and disaster assistance centers.”

These options included public, as well as emergency response, shuttle and specialized transit services that not only met immediate needs, but also could be part of the ongoing process of rebuilding the Gulf Coast.

MDOT offered direct response and collaboration with local, state and federal organizations to address a range of mobility needs. 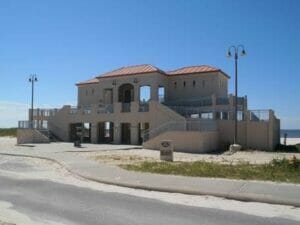 “Our immediate priority after the storm was to get our maintenance and operations facilities back up and running,” said Coastal Transit Authority (CTA) Director Kevin Coggin. “Because of the widespread destruction, we knew we needed to be operational as quickly as possible.”

MDOT and the CTA worked closely together to develop a short-term Emergency Public Transportation Plan that addressed the emergency transportation needs of residents and evacuees in the entire six county region most affected by the disaster.

MDOT supported the CTA by providing equipment, such as buses and a van, as well as facilitated talks between the CTA and the Federal Transit Administration (FTA). Because of this collaboration, the CTA was operational and providing free fare service to the Coast within a week of the storm.

In the ten years since Hurricane Katrina hit the Coast, the CTA has replaced its entire fleet as well as replaced and modernized all of its facilities. The CTA also added Intelligent Transportation System (ITS) upgrades, such as an electronic dispatch system, to its facilities. 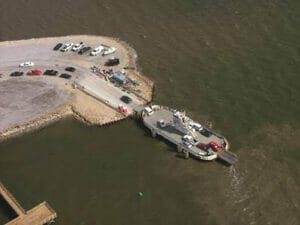 Reestablishing traditional forms of public transportation wasn’t the only obstacle MDOT faced in the wake of Hurricane Katrina. With the Bay St. Louis Bridge being reconstructed and Interstate 10 overloaded with traffic, the traveling public faced a grueling trip between Bay St. Louis and Pass Christian, one that normally took less than 15 minutes.

“Before the new bridge opened, I was driving 55 miles- each way- to take our children to school,” said Pass Christian Mayor Chipper McDermott.

The idea of a ferry service between Bay St. Louis and Pass Christian was introduced in an effort to reduce the length of the trip along detour routes; and in March 2006, MDOT began conducting a feasibility study to determine the possibility of establishing this service. The feasibility study was concluded in June, and a request for bids was issued in September.

In preparation for the ferry service, MDOT Maintenance crews worked around the clock and completed all phases of construction, except pile driving and material supply, for the ferry access roads and landing pads.

The free ferry service began operation on November 1, 2006 and ran for 12 hours a day, seven days a week until the new Bay St. Louis Bridge was dedicated on May 17, 2007. 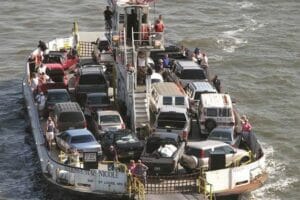 Although the ferry service lacked the ability to transport the number of vehicles that used the Bay St. Louis Bridge daily, it brought a much needed morale boost and a sense of connectedness to the area. At its peak performance, the ferry was able to transport 960 vehicles in a day.

Funding for the free ferry service, as well as access and landing area construction, was provided by Emergency Relief funds from the Federal Highway Administration. Without collaboration between multiple state and federal agencies, the idea of a free ferry service would not have become a reality.

MDOT played a vital role in rebuilding and reconnecting communities along the Mississippi Gulf Coast after Hurricane Katrina. The resilience shown by residents and state and local officials in South Mississippi reflects MDOT’s efforts to replace a critical transportation network in record time.