One will never walk through the bamboo walls of the most unassuming place on earth without recalling the inventors of a world so distinctive, so incomparable.

On Monday, Sept. 7, Delta icon and artist extraordinaire Lee McCarty took his last breath on earth. He was found in his bed in his home above the studio, which was quite fitting. After all, the old mule barn is where it all began. McCarty was 92. His beloved wife, Pup, preceded him in death in 2009.

The McCartys’ reach across the world through their art, however, will continue to inspire. They were true treasures of the Mississippi Delta and of Mississippi. 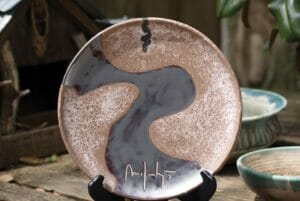 “Lee McCarty, with his wife Pup, was a dynamic couple whose down­-to-­earth personalities and artistic creativity enhanced the culture and understanding of the Mississippi Delta and our state. Lee’s passing marks the end of an era, but I think the McCarty influence will endure,” said Sen. Thad Cochran.

Along the way, the couple befriended thousands and supported countless art endeavors. Caroline Gaines is one such friend, who knew the couple for many years.

“Our families were very close,” Ed Kossman explains. “My mother and father were close with the McCartys. My mother bought the first piece of pottery they sold. My mother studied art in college and had a special interest in art, especially theirs. My brother Chester lived next door to them in a property of theirs.” Ed and Kitty Kossman had known the McCartys for decades.

“He was an icon. Pup and Lee were both so smart, so artistic,” he added. “They did so many charitable things for people. He received lots of national recognition. We went up to New York one time, and we decided to visit the Metropolitan Museum and have lunch there. Lee walked to the information desk and asked if had they any pottery displays. They had two. The lady noted that she was from the south. She told Lee that she and her husband were in Oxford 60 years ago and bought two pieces of pottery from a couple who was making pottery in their garage. She told him those were her favorite pieces she had ever owned. Turned out it was Lee’s. He stayed three feet off the ground the rest of the trip.”

Kossman said Lee was incredibly optimistic, so much so, that at 92, he had just bought a new car.

“You cannot understate their gardens,” said Kossman. “Their gardens were beautiful.

Early in their career, my father knew someone with Better Homes and Gardens, and they were featured in it. It was their first national recognition. He grew vegetables, and early in the morning, you would find he had left some at your back door.”

The Reverend Dr. Julia Moore, was also a dear friend.

“Several years ago, the Center for Southern Culture did a wonderful film on Lee called ‘So Wonderfully Connected,’ and I think that title says it all. Lee was always all about connections — to people, to places, to events. He loved nothing better than spinning you a tale, perhaps a little embroidered, of some place he had been where he had attended an event, and who he had met there — that he still kept in contact with,” she said. “Lee was all about relationships, whether it was with his beloved Mississippi Delta, his customers, his numerous self­-proclaimed godchildren, his family. I am so proud to say that I was a small part of that connectedness — we who called him ‘friend.’ It is a great loss in my life to know that, when the phone rings, I won’t pick it up and hear ‘McCarty here.’”

McCarty was also well-­known in the art community for being a great supporter.

“Mr. McCarty was a great supporter of the Arts in all forms, and he recognized the cultural value of the Bologna Performing Arts Center for our region. He will certainly be missed,” said Laura Howell, executive director of the BPAC.

“Lee and Pup were staunch supporters of the arts and of Mississippi Institute of Arts and Letters. Their dear friend, Keith Dockery McLean, was one of the founders of MIAL, so Lee and Pup totally understood our mission, which is to recognize, honor and award our Mississippi artists, musicians, and writers. The McCartys were Patron members, award sponsors, and faithful attendees of our yearly awards banquets. They also received our highest honor, the Lifetime Achievement Award, in 1996. Their presence will be missed, but their influence will continue through their lifetime of work. Theirs is truly an inspirational story of devotion to each other and to their art,” said Margaret Anne Robbins, the MIAL executive secretary.

And their work will live on.

His godsons, Stephen and Jamie Smith, will continue the globally­-known pottery business. They came home in 1998, joining “Uncle Lee” and “Aunt Pup” in the pottery business with Jamie learning the craft as Stephen took over the business side of McCartys Pottery. Besides, the two grew up with the business, playing in the gardens and even creating pieces of their own in their youth. The Smith brothers are also the great-nephews of Aunt Margaret and Uncle Albert Smith, who provided the McCartys with whatwould become the perfect spot for a business.

“He loved his godchildren, Jamie and Stephen Smith, and he died knowing that they had the knowledge and talent to continue the McCarty tradition of creative quality work,” Gaines said.

Born in 1923, Lee McCarty grew up in Merigold and attended Delta State University before serving in WWII. After the war, Lee married Pup Rone and then completed his Bachelor of Arts degree at the University of Mississippi in 1948. After graduating, McCarty and his wife Pup left for Columbia University in New York where he received a master’s degree in education. The couple then returned to Oxford, where Lee taught science in the University High School. It was a series of serendipitous events that led them to choose their art medium. Pup had taken pottery classes during their collegiate years at Ole Miss, and when she realized she was the only female student in a room full of large football players, she made Lee come with her.

The first pieces of pottery they made were from clay that Mississippi writer William Faulkner allowed them to shovel up from a ravine behind Rowan Oak in Oxford. Lee and Pup started their adventure back in 1952, when the newlyweds moved to Lee’s hometown of Merigold. His mother had taken ill, so they came to care for her. Their vision was a simple one — to create a life that would allow them to live life on their own terms.

They would live free of debt, both having lived through the Great Depression. When Aunt Margaret offered the young couple Uncle Albert’s mule barn for a studio, they decided to move into the loft and remained there for the rest of their lives. The pottery classes at Ole Miss, along with the offer from Aunt Margaret, coupled with Pup’s art genius and Lee’s knowledge of chemistry, gave them the impetus to open their small pottery shop in 1954.

The McCartys were very much in love, so much so that it affected the name of their business: McCartys does not have an apostrophe for a reason. An apostrophe denotes a possessive relationship, which did not suit them. It was that passion, that togetherness, that opened up an entire world of pottery that would soon take the south, the country, and eventually the world by storm.

Those days were not necessarily easy, and that success was not instantaneous. In fact, Lee taught chemistry at the high school in Shelby, while Pup tended the shop. The two built their studio nail by nail. Pup laid the entire first terrace by herself with only one helper.

They experimented with glazes and shapes until they were satisfied. Then they began.

“Our first piece was a beautiful bowl,” Lee McCarty said in a previous interview. “It was a simple bowl, in our signature nutmeg with the river running through it. We finished it and put it in the back to save it.”

By the 1960s, they had shown in several museums and exhibits across the country, including Brooks Memorial Art Gallery in Memphis, the Denver Museum of Art and The America House in New York, to name a few.

In 1960, they won first prize in the National Show at the Delgado Museum in New Orleans — the winning exhibit was a highly textured stoneware bottle fired in their original nutmeg glaze. Also in 1960, they designed the accessories for the Pace­ Setter House featured in House Beautiful, and then again in 1962.

During the 1960s the McCartys developed a variety of glazes and over time narrowed the range to the jade, cobalt blue and signature nutmeg. Lee said Pup was quite the talent with color.

In 1991, the Samuel P. Harn Museum of Art at the University of Florida in Gainesville held a retrospective called “Mud Magic: the Mississippi Pottery of Lee and Pup McCarty.”

In 1995 the University of Mississippi Museum of Art held a large retrospective called “Masters of Merigold: 40 Years of McCarty Pottery.” Then in 1996 the Mississippi Institute of Arts and Letters awarded them the Lifetime Achievement Award.

In 2012, the Mississippi Arts Commission honored McCartys Pottery with the Governor’s Award for Excellence in the Visual Arts. Also in 2012, the Smithsonian Institution inducted the gardens at the studio into their Archives of American Gardens.

In August of this year, the University of Mississippi announced plans to induct Lee into the Ole Miss Alumni Hall of Fame.

McCarty also started another chapter later on in his life. He began to make jewelry again, as they did in the beginning. McCarty also began painting and created many beautiful mixed media works of art.

McCarty once said with all the fame, fortune and love in his life, he had one regret, which was that he wouldn’t live to see 200. He loved life that much. He was a true Renaissance man, an astute business man, a philanthropist and humanitarian, but most importantly to him was that he was a family man.

“My greatest accomplishment in life is that I married someone as wonderful as Pup,” he said in a previous interview. “Also, our having ‘near children’ like Jamie and Stephen … I’m so impressed with them and our great-­godchildren.”

When he was asked about what makes McCartys pottery so special to people, he said it was because it and they were so connected to the Mississippi Delta, and that the inspiration for the pottery comes from this area, this land. Folks who have left and live elsewhere always want a piece of McCartys around because of these ties to home.