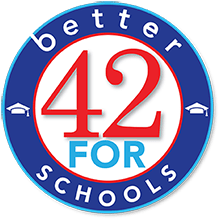 “To allow elected state officials to intentionally manipulate an official ballot to gain an advantage on Election Day would be a gross disservice to the nearly 200,000 Mississippians who signed petitions to place Initiative 42 on that ballot,” said Jonathan Compretta and Michael Rejebian, co-campaign managers for 42 For Better Schools and plaintiffs in the lawsuit.

Defendants in the lawsuit are Secretary of State Delbert Hosemann and Gov. Phil Bryant, who approved the ballot Sept. 9 as members of the State Board of Election Commissioners. Attorney General Jim Hood is a member of SBEC but does not have a vote on this issue.

“This complaint challenges the Secretary of State’s preparation and the Governor’s approval of an incomplete and unlawful sample ballot for Initiative Measure 42,” the 11-page document states.

The ballot goes out to circuit clerks statewide for use in developing local ballots. Absentee voting is slated to begin Sept. 19.

“Whatever else may be placed on the ballot by the Secretary of State, the full text of the initiative – both the amendatory language and the amount and source of revenue statement – must appear on the ballot for the general election,” states the complaint also filed by two Initiative 42 petition signers and a Webster County election commissioner.

The plaintiffs cite Section 273 of the Mississippi Constitution as the basis for their legal action.

They argue that the approved ballot does not contain original initiative language proposing a multi-year phase-in to fully fund K-12 schools, which have been fully funded only twice since the 1997 passage of the Mississippi Adequate Education Program, the funding formula.

They also object to the ballot’s use only of the Legislative Budget Office’s fiscal analysis for Initiative 42, saying, the LBO’s work “is susceptible to manipulation by the legislative leadership.”

“As a result, including of the full text of Initiative Measure 42 is not only mandated by the Mississippi Constitution, it is necessary to ensure a fair election,” the lawsuit notes.

Initiative 42 alls for “adequate and efficient” funding for K-12 schools. In January, the Legislature passed its own alternative initiative, the first in state history, which even its supporters said is aimed at confusing voters and killing Initiative 42.

In the past eight years, the Legislature has failed to deliver on nearly $1.7 billion funds promised through the MAEP. As a result, some 150 school districts throughout the state continue to suffer from lack of state support, while their local governments feel the pressure to raise property taxes to help bridge the gap.