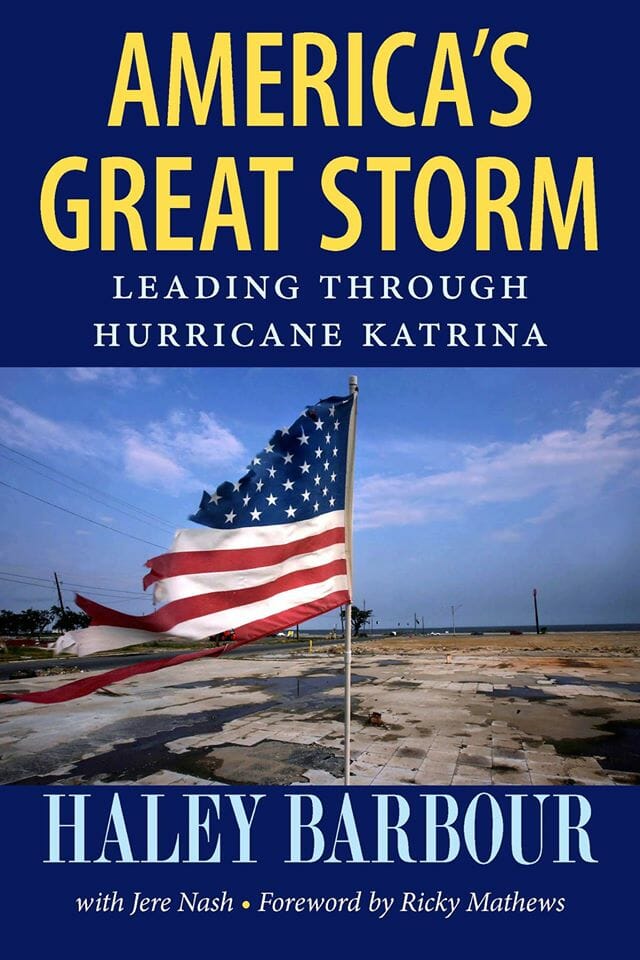 Editor’s Note: Former Mississippi governor Haley Barbour will speak at the Overby Center this Friday at 5 p.m. He will discuss his book with Assistant Dean Charlie Mitchell of the Meek School of Journalism and New Media. Barbour’s appearance at the Overby Center will be the third time he has been featured in a program since the center was opened in 2007. The Overby Center Fall program will conclude with this event.

Below is a column by Scott Coopwood, publisher and owner of Delta Magazine, Delta Business Journal, and the Cleveland Current.

During President Bush’s term as President, many pundits have said the defining moment of his presidency was September 11, 2001, when a series of coordinated terrorist attacks by Al-Qaeda took place on the Twin Towers in New York and the Pentagon in Washington.

The day after those attacks, President Bush stood on top of the Twin Tower debris and with his arm around one of the New York City firefighters, told the world the U.S. would soon respond in a huge way. That moment defined Bush’s presidency.

In our own backyard, a catastrophic event took place that helped define another political leader’s legacy, Governor Haley Barbour and leadership during Hurricane Katrina. Barbour was governor when Katrina slammed into Mississippi and Louisiana. His outstanding guidance and performance during that tragedy was spot-on. And, he has just written a book about it entitled America’s Great Storm: Leading through Hurricane Katrina.

The book is about what took place behind-the-scenes leading up to the storm and after it hit Mississippi. It is interesting to note that the former head of the Republican Party in the U.S. chose a big-time Mississippi Democrat operative, Jere Nash, to help him with the book.

A few years ago, Barbour told me about his work and involvement with Katrina. He told me his main concern leading up to the storm was that people on the Mississippi Gulf Coast were not taking the incoming storm seriously, that although a mandatory evacuation order had been given, people were not leaving the coast and instead were planning to ride it out. Then, a lightbulb went off and someone around Barbour mentioned that Katrina had the potential to be far worse than Hurricane Camille that had ravaged the coast in the last 1960s. Barbour quickly instructed his staff and others to start saying “…this hurricane is going to be far worse then Hurricane Camille.” He said after this message got out to the press, within hours people starting fleeing the coast … hours before Katrina landed.

Because of Barbour’s longtime Washington connections, after the storm Mississippi immediately started receiving help both in terms of funds and boots-on-the-ground. It is interesting to note that Louisiana did not.

In addition to preparing for Katrina, various chapters in the book focus on the special legislation session that allowed casinos to build on shore, the role of the recovery commission chaired by Mississippi businessman, Jim Barksdale, a behind-the-scenes description of how Barbour worked with Congress to pass an unprecedented, multi-billion dollar emergency disaster assistance appropriation, and the gigantic roles played by volunteers in rebuilding the entire housing, transportation, and education infrastructure of south Mississippi and the coast. Barbour and Nash also interviewed over 45 key people who were involved in helping Mississippi recover and their accounts of the storm are also featured.

Barbour has written an excellent book that is very moving and full of historic information. The University Press of Mississippi is publishing the book and while local bookstores should have copies, visit www.upress.state.ms.us to order a copy and also for more information.