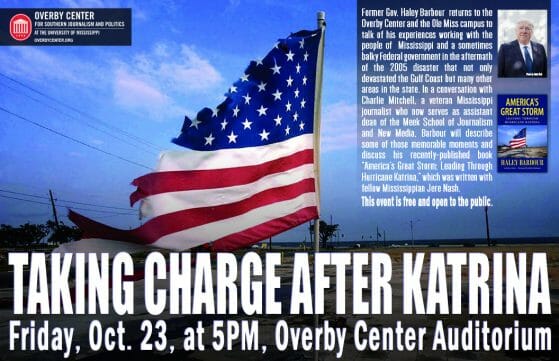 Haley Barbour, Mississippi’s governor at the time of Hurricane Katrina, returns to the Overby Center for Southern Journalism and Politics on the Ole Miss campus this Friday, Oct. 23, to talk about how he and the citizens of the state reacted to the disaster that ravaged the Gulf Coast and brought destruction to other areas as far north as Oxford ten years ago.

In the recently-published book, “America’s Great Storm: Leading Through Hurricane Katrina,” Barbour describes the massive recovery effort, and he will elaborate on the subject in a conversation with Charlie Mitchell, assistant dean of the Meek School of Journalism and New Media at Ole Miss. Mitchell is a former editor of the Vicksburg Post and continues to write a syndicated column on current events for Mississippi newspapers.

The time for the event has been changed to 5 p.m., and the Overby Center is making arrangements with campus authorities to provide free parking for guests in its lot adjacent to the auditorium where the program will be held.

The program concludes the Overby Center’s schedule of events for the fall semester.

Barbour is a Yazoo City native who served two terms as governor from 2004 to 2012. He is a prominent alumnus of the university, where the Haley Barbour Center for Manufacturing Excellence was dedicated in his honor in 2012.

His book, written with fellow Mississippian Jere Nash, has enjoyed strong sales since it was published in late summer by University Press of Mississippi. Writing in the Mississippi Business Review earlier this month, Jack Weatherly observed that the book dealt with several poor decisions made by the Bush Administration in the immediate aftermath of the storm. In spite of those problems, Weatherly wrote of Barbour, “His was a masterly performance by a political leader in a time of crisis.”

Barbour’s appearance at the Overby Center will be the third time he has been featured in a program since the center was opened in 2007.

“We’re always happy to have Governor Barbour because he’s able to mix candor with humor in his appearances,” said Overby Fellow Curtis Wilkie. “Even though Katrina is tough subject, the message in his book is inspiring because it emphasizes the resiliency of the people of Mississippi and their ability to set aside all sorts of political and cultural differences to come together in the face of a disastrous situation.”