What Is That Song Played Before Ole Miss Games On The Jumbotron?

People have been calling the Ole Miss Athletic Department asking what is the song that plays before and after home games in Vaught-Hemingway stadium on the jumbotron.

Thanks to Kathryn Hood, children’s book author, we have the answer!

The Ole Miss Rebel Blues was recorded by several well-known musicians and the song will be playing this Saturday, October 24, in front of the Student Union before the Texas A&M game. Kathryn Hood will be signing her children’s books: Ole Miss A to Z, and The Ole Miss Activity Book in the Barnes and Noble tent from 1 until 4. The Ole Miss Activity Book features crossword puzzles, word searches, word scrambles, crack the code, etc. about Ole Miss, Oxford, famous Ole Miss Alumni and Rebel sports. 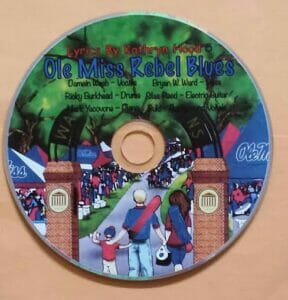 Hood hired the Ole Miss Rebel Blues band to play during the signing from 1 p.m. until 4p.m. This is the third year that Hood has been invited to sign books for the Barnes and Noble Ole Miss Campus Book Store.

Hood’s first book was Ole Miss A to Z and then The Ole Miss Activity Book followed. Hood wrote the lyrics for the CD of The Ole Miss Rebel Blues. During the signing, filming will take place for a movie that is being made by Ole Miss music professor Nancy Balach, who is in charge of Living Music Resources.

Hood will also be signing the Ole Miss Rebel Blues CD. The song is about how much Rebels love the Grove and includes verses about Hotty Toddy, Fins up, Lock the Vaught and our colors red and blue.

“Bryan Ward at the Tone Room recorded and produced the Ole Miss Rebel Blues for me and also played bass on the song. He is the producer for and member of the Nashville group, The Eisenhauer Band. They appeared at a private function for Ashley Judd in Leiper’s Fork, Tennessee and the band was the opening act for Trace Atkins,” Hood said.

The vocalist for the recording is Damein Wash, an award-winning artist who is front man with Ricky Burkhead and the Soultones, a seven piece band. Wash’s debut single, So Long, won an American Song Writers Award this year and is available on itunes. Wash has been leading and directing choirs for ten years. He has a degree from Ole Miss with a BA in Choral Music Education. Damein has a new song out called War of Roses. Silas Reed played solo guitar on the song and Ricky Burkhead mixed and mastered the track.

Hood started taking drum lessons from Ricky Burkhead, and that is how the whole idea for the song was started. Burkhead is a member of the Soultones and well-known percussionist and professor in the Music department at Ole Miss. He founded the University of Mississippi Steel Drum Band, which he also directs.

“Silas Reed performed and sang the Ole Miss Rebel Blues at my first book signing during a game day three years ago. We connected with Ward at the Tone Room,” Hood said.

Mark Yacovone, a pianist for Thacker Mountain Radio plays the keyboard, and Buki, a young female vocalist from Nigeria was the background vocalist. Ward produced her CD as well.

“Bryan guided me through the entire process of making a CD from start to finish, and without him, I would never have a finished product. He is an amazing technician and musician,” Hood said.

Kathryn Winter is a social media specialist and staff writer for hottytoddy.com. You can e-mail her here kathryn.winter@hottytoddy.com