Coopwood: Finding the Footsteps of My Family in New York City

Last week, I had the great opportunity of participating in one of the magazine industry’s main conferences held each year in New York, the Folio Magazine Conference.

For five years, I have been asked to attend and tell my story on how we can publish quality magazines – Delta Business Journal and Delta Magazine – in one of America’s backwaters. I finally accepted the invitation and attended. In the audience were magazine executives from all over the country. It was a great experience and I learned a lot about where our industry is heading and of course over several days made some significant industry contacts. Many wanted to speak to me after the Q & A about living in Mississippi, my career, my accent and everything else.

I have been traveling to New York since 1984 and over the many years I must have visited that place a hundred times. But, I have never been able to pinpoint where my great-aunt and uncle, J.W. and Elizabeth Thomas lived during WWII in that huge metropolis. J.W. and Elizabeth helped raise me in the small Mississippi Delta town of Shelby and really I looked upon them as my grandparents. J.W. told me they lived in Tutor City in Manhattan and that he could throw a rock from his window and hit the United Nations building. But, I never knew the actual address until this past summer when I was consolidating eight storage units into three. That is when I stumbled across J.W. and Elizabeth’s address …. 333 East 43 Street, Apt. 920.

The day before we left NYC headed back to Mississippi, I hired a car and a driver and off we went in search of this address. Cindy, daughter Travis, and I didn’t know what we would find. Would the building still be there? Or, would it have been replaced by now with a new building?

Our driver circled the block, then we found the very east end of 43rd and it was blocked off due to construction. We jumped out of the car and started walking down the street looking for the numbers. Within five minutes Cindy found 333. The building was intact and probably looked exactly as it did when J.W. and Elizabeth lived there. I couldn’t believe it. I walked to the front door and the doorman opened it. I told him the story about J.W. and Elizabeth living in that building during WWII.

“Oh yes, Apt. 920 … still there,” he said. “That means your relative had a great view of the East River.” And, that is what J.W. had told me. He also told me during WWII he saw several very nice Navy destroyers cruising up and down the East River.

Time had not moved forward in the lobby of that building at East 43rd and the year could have still been 1942 because of the decor. Walking in their footsteps in that lobby and through the front door was very moving and I could envision the nice life they lived in that building during WWII when New York was in its heyday. Back then, they were good friends with Walt Disney, Igor Sikorsky (inventor of the helicopter) and several other celebrities. Could they have perhaps entertained these people in their apartment?

Sixteen years before WWII, J.W. tracked down Elizabeth and married her in New York City when Elizabeth and her mother were there on a visit. He drove all of the way nonstop from Mississippi, found where they were staying, and waited all afternoon in the hotel lobby for them to return from a shopping spree. J.W. proposed to Elizabeth on the spot and married her the next day in New York City.

After WWII, J.W. never returned to NYC. He said he didn’t want to see it again because he knew it was no longer in its glory and he wanted his memories of New York to be of the shining star it was when he lived there.

I was thankful to have stumbled across the footprints of two people I loved dearly, that loved me back unconditionally and helped shape me. 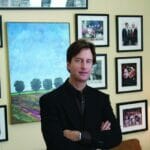