The MS Flood Futbol Club had four teams medal in the Wolf River Classic in Memphis, TN. Highlighted by the U19 boys team, Club Director Chuck Trost was proud of his coaches and teams. “One of our goals for the organization is to provide an environment for serious soccer players to continue to play as they get into the older divisions. We believe the Flood is providing great service for these kids and are excited to watch the Flood players contribute to their high school teams throughout north Mississippi. Trost also addressed the tournament and the tournament director, “Mike Knowles always does a great job in recruiting top teams for this tournament. We are always excited to bring our club to tournaments when he is involved.”

The U19 Flood took the Championship in their division. The Flood is proud to provide an environment for these young men to unite their skills in this age group. When asked about the success of the U19 boys, team manager Bob Brown responded excitedly, “We were very proud of the boys this weekend as they won their division. We even had a couple of our young men out because they were invited to play at an ID camp. Winning the entire division is quite an accomplishment.”

The U16 Flood girls also took second in their divisions highlighted by a 4-0 Sunday win over the U16 girls from Greenbrier, South Carolina. Chris Wilkerson and Norman O’Connor coached the U16 team for the Wolf River Classic. “We were proud of the girls for playing up to the U16 division,” Coach Wilkerson said. “The girls really battled with the continuous rain, but they played unselfishly, possessed the ball and didn’t appear to get tired,” added Coach O’Connor. 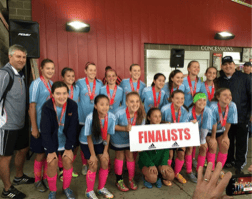 If you or someone you know is interested in playing for north Mississippi’s premier D1 soccer club, please contact director@msfloodfc.com.