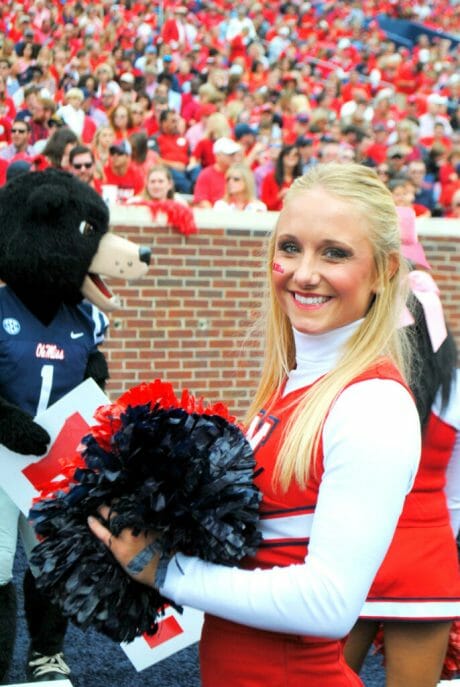 Carly Dahlem is a 22-year-old student in her senior year at The University of Mississippi. She’s one of the newest cheerleaders for the Ole Miss Rebels, but her journey to the field wasn’t an easy one.

You can hear this Ole Miss cheerleader’s voice over all of the others on the sidelines. Her voice is distinguished, not just by the volume, but by the slight Texas twang that sneaks in at the end of each word she yells. You can see her jumps and tumbling flips the moment her feet hit the playing field. What puts the extra kick in senior cheerleader Carly Dahlem’s cheer routine? 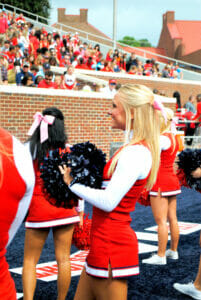 The Woodlands, Texas native said her lifelong love of tumbling and cheering, coupled with her passion for Ole Miss inspired her to try out one last time to cheer for Ole Miss. She has tried out for the cheer team as a freshman but was cut in the final round. Realizing this was her final year on campus, she threw caution to the wind and signed up for the spring tryouts.

Dahlem was one of the oldest girls to audition for the team and her competition was made up of mostly incoming freshman.

“Going into tryouts, I knew my work was cut out for me and I would need to start training for it early,” Dahlem said.

With vigorous training and preparations for her audition, she felt that she was ready and had a chance to make it onto the squad. She had successfully made it through all of the previous cuts but fell short during the final round for the 2015-2016 Cheer Team.

“It was always a long shot for me to make it since I was older than most of the other girls, but I still gave it all I could every round,” Dahlem said.

Later that night, while checking her emails, she noticed that the Ole Miss Cheer coach had sent her an email. Thinking it was probably just the obligatory, “thanks for trying out” email. Dahlem almost deleted it without reading it. Her curiosity got the best of her and she calmly clicked, open. The coach’s email explained that she had a great try out and was extremely close to making the team. The email offered her a “callback” chance, which is an opportunity to join the Ole Miss Cheer Team if for some reason a spot were to open between then and August 1, 2015. With hope and optimism, Dahlem decided to agree to the offer.

As the summer days passed and the deadline quickly approached, Dahlem was sure that a spot wouldn’t open for her on the team. On the day of deadline, August 1st, Dahlem received a life-changing phone call letting her know that a spot had opened up on the team and it was her spot, if she is still interested in taking it. A second chance to cheer for her beloved Ole Miss Rebels was beyond her wildest expectations. 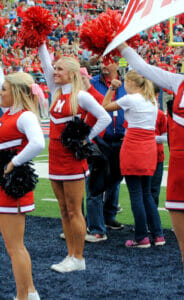 “When I listened to the voicemail, I was in total shock and couldn’t stop screaming,” Dahlem exclaimed, “So, I listened to it again and again.”

Dahlem who was a high school cheerleader and a competitive gymnast all of her life is now one of only two seniors on the team.

“It truly is an honor and blessing to represent the university I love and to cheer on my favorite team each and every game. To have a second chance to cheer for Ole Miss is a privilege I will always be grateful for,” Dahlem said.

During the next home football game, when you hear, “Are you ready?” and you see a blonde haired cheerleader yelling at the top of her lungs, don’t be alarmed. It’s just Carly Dahlem, senior Ole Miss cheerleader living out her dreams right before your very eyes.

Peyton LoCicero is a Broadcast Journalism student at the Meek School of Journalism and New Media. She can be reached at pelocice@go.olemiss.edu.