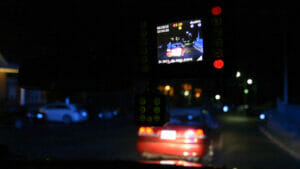 Sergeant David Saban sits upright at a desk in his office at the Oxford Police Department. One hand is placed on his forehead; the other is gripping a large Styrofoam cup of coffee. His walkie-talkie chimes with questions and “10-4’s,” but his eyes are focused on a computer screen, until a patrol officer appears at the door.

“I just looked at the cameras,” the officer said. “The Square is packed.”

“It’s going to be a big night,” the two uniformed men say in unison.

The city of Oxford is home to over 18,000 students who attend The University of Mississippi. Like college towns across the nation, when the sun sinks below the horizon on Fridays, many of those students rise to the occasion.

Saban is all too familiar with this social tendency. In his ten years at the department, he has experienced numerous intoxicated escapades.

After filing his reports, Saban stands up from his desk. The time is 9:26 p.m. – time to patrol.

“A lot of people think we’re just out here to mess with people, that we grew up as bullies, or maybe we were even picked on, and we want revenge,” Saban said as he cranked his patrol car. A Christian rock song begins playing from the radio.

“I wasn’t picked on. I had friends. I was a kid once. I ran from the cops too,” he said as changed the car’s gear into drive and pulled out of the department’s parking lot.

Saban’s route begins at the Square. As he cruises cautiously down Van Buren Avenue, his eyes scan for any foul play. One pedestrian catches his eye.

“Did you see that?” Saban said as he pointed out the driver-side window at a young man walking down the sidewalk. “He was about to flip me off, but he got caught.”

The officer let out an amused laugh.

“He stuck his hand out, and he was bringing the middle finger up, then I looked at him.”

But, Saban has become immune to this sort of blunt disrespectful behavior.

“You know, you get out (of the academy), you’re proud of your job, and somebody will be sitting there calling you a ‘pig,’ spitting at you or something like that,” he explained. “But you just learn to deal with it.”

With one hand on the steering wheel, the officer makes his way around the Lafayette County Courthouse then merges onto East Jackson Avenue. When he passes Rooster’s Blues House, shouts erupt from patrons drinking on the balcony.

“We’ve had a problem people throwing their beer bottles off the balcony and at our cars,” Saban said. “One night, I had my window cracked open, and someone threw a bottle, and it broke right above the window frame.”

Saban said he understood that college students make mistakes. He, too, was once a student at The University of Mississippi. In fact, in his freshman year of college, he decided he would pursue a career in criminal justice.

“I was always interested in the law and legal aspects,” he said. “I didn’t know if I wanted to be an attorney or enforce the law.”

He reached his decision after he was assaulted in his dorm by two of his own fraternity brothers.

“They beat the absolute hell out of me,” Saban recalled. “People who witnessed it in the hall said they hit me in the head with some metal object and stood over me, just kicking me as I was unconscious.”

When he awakened, he noticed a University Police Department officer kneeled beside him.

“I remember him saying, ‘Don’t worry. We’re going to catch these guys’,” Saban said. “And they did. They ended up finding them. It was a lightbulb moment for me. I was like, ‘You know what? I want to do that. I want to go catch ’em’.”

Today, he does just that.

“You know? Despite the stuff we have to deal with, I like coming to work everyday. Something new happens. There’s always something to keep you interested,” Saban said. “You really get to see results of your work.”

Lacey Russell is a senior broadcast journalism major at the Meek School of Journalism and New Media. She can be reached at llrusse2@go.olemiss.edu.