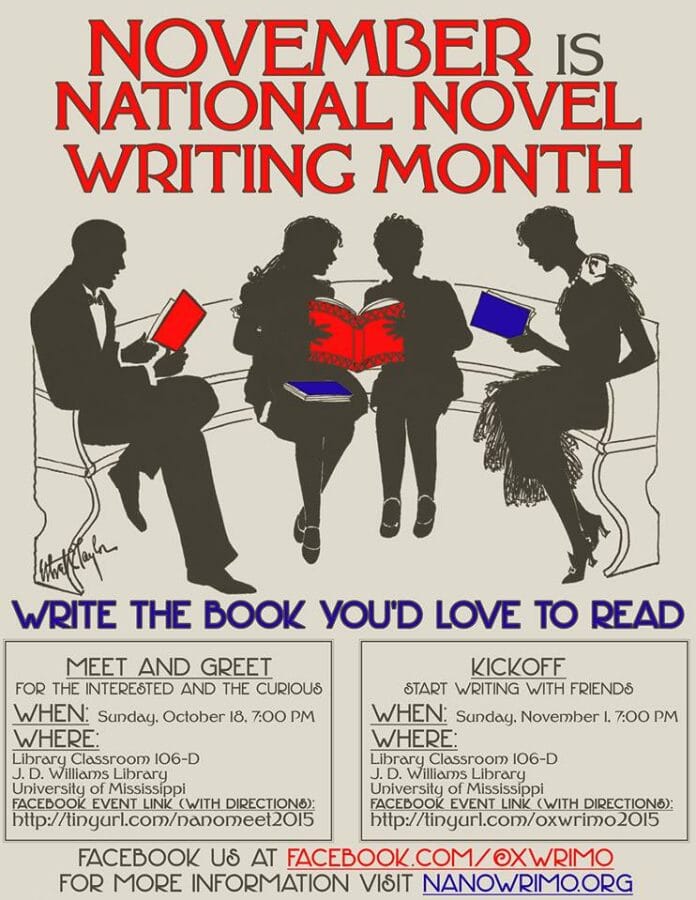 They say everyone has at least one good story in them—well now is the time to try to get it down on paper.

November 1 marks the beginning of National Novel Writing Month, or NaNoWriMo, an event that challenges writers to get 50,000 words of a novel down by the end of the month. North Mississippi’s municipal liaison for the program, associate professor and reference librarian Alex Watson, will host a kickoff write-in this Sunday night in library classroom 106-D at 7 p.m.

NaNoWriMo began in San Francisco in 1999 and has since become an international event that has seen over 250 novels traditionally published, most notably being Sara Gruen’s Water for Elephants. Last year, the event welcomed over 300,000 participants, 60,000 of whom reached the 50,000-word mark. Writers sign up at nanowrimo.org and are divided by region, allowing participants to attend events, get help from their municipal liaison and communicate with others in the area.

“The entire purpose of it is to provide a deadline and a sense of urgency, because a lot of people are interested in writing, but it’s very easy to put off,” said Watson. “By, on the one hand, giving them a very firm and ambitious deadline and, on the other hand, giving them the tools and attempting to build a support network, the idea is to get people writing, get them writing what they want to write and have something down on paper by the end of the month.”

Watson has been participating in NaNoWriMo since 2007. At the time, the closest support network for participants was in Tupelo, so he began acting as the municipal liaison for the Oxford area until officially earning the title a few years later.

“I have found [NaNoWriMo] to be really inspiring to myself,” said Watson. “It really helps me write things and get things done, and I really enjoy sharing it with other people.”

Throughout the month, Watson hosts several events to offer support for participants, including weekly write-ins.

“A write-in is basically an event where people get together and write as much as they can,” he said. “The idea is that they’re with other people, so they’re more likely to get some writing done. It also is a venue for me to try and provide support.”

This year there will be two major write-ins, this upcoming Sunday and Nov. 15, in the J.D. Williams library as well as two mini write-ins at the Jackson Ave. High Point Coffee on Nov. 8 and 22. Watson also gives out prizes and issues challenges to writers at these events, one of the most popular being the traveling shovel of death.

“This one comes from the National Novel Writing Month website, and the idea is that if you need something to happen, have a shovel appear in your novel that a character has to use to kill or at least attack another character.”

Watson encourages everyone to try their hand at National Novel Writing month, regardless of what they want to write.

“There is absolutely no judgment as to somebody’s subject matter, we’ve had people do it all,” he said. “I just want people to write the novel they would like to read that they can’t find on the bookshelf.”

Naomi Kennedy is a senior print journalism major at the Meek School of Journalism and New Media. She can be reached at
nrkenne1@go.olemiss.edu.