Sugar Magnolia: Born From and For Creativity 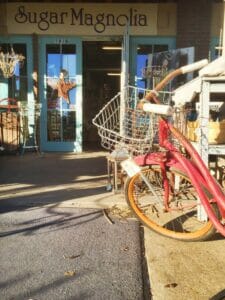 “Creativity. That’s what I’ve always noticed about them,” Sugar Magnolia manager Brach Smith said with a smile after listing what was special about three sisters and their mother, who co-own the antique mall. “They love to see other people’s creativity, and it’s contagious.”

Jane Steelman, Molly Harwell and Leah Christman developed a special appreciation for antiques after browsing around shops in different areas. They later decided to expand the idea of opening their own store with their mother, Farrah McAlexander. The four composed Sugar Magnolia, which began business in Oxford in 2008.

Smith said the chemistry between the sisters, mother and Sugar Magnolia combine to create a unique element. 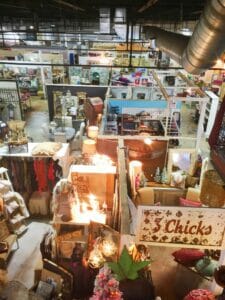 “They definitely bring their own version and spin to the store, and that brings in and welcomes variety,” said Smith. “That’s the main thing that sets it apart from other antique stores and malls in Oxford.”

The warehouse-style building is home to roughly 95 different vendor booths, which each bring the flair of every owner.

Kathy Howington, who has resided in Oxford for about 30 years, has claimed two spots in Sugar Magnolia for four years, one of which is red and blue from corner to corner with Ole Miss-decorated canvases, door hangers and picture frames.

“It’s like therapy for me after my day job,” Howington said. “It started off with my daughter who got me involved, then my sister wanted to be involved, too. So, now we’re ‘MAD Decor’: for Mom, Aunt and Daughter.”

As manager, Smith says the most fun thing about his job is getting to know the customers.

“You grow to know them. I still see the customers that I met when I got hired three years ago,” Smith said. “You just maintain that relationship.”

Olivia Wells is a senior print journalism major at the Meek School of Journalism and New Media. She can be reached at otwells@go.olemiss.edu.