Wrenn has had several of his paintings featured at City Grocery since his first solo art show exhibit in Charleston last spring. Along with different paints, he uses berries and clay to create his master pieces. The berries give his painting unique colors while the clay adds texture, bringing the paintings to life.

“He paints from memory,” Glenna Callendar, native of Charleston and Wrenn’s manager, said. “You can even stand there and tell him a memory [of yours] and he draws it as you tell it.”

Wrenn has been painting since he was a child. Callendar says Wrenn’s grandfather, who was blind, would tell him stories of his youth, and Wrenn would draw them to life.

“He’s a jack of all trades,” Callendar said. “He paints, he skins deer, trains horses. He is one of those early American men.”

Since 2014, Wrenn has been featured in several art shows in Mississippi. His first solo exhibit was sponsored by Charleston Arts and Revitalization (CARE) in March 2014, and the Yoknapatawpha Arts Council (YAC), along with HottyToddy.com, sponsored his work at the Powerhouse in Oxford in September 2014.

Among being featured in art shows and restaurants, Wrenn stars in a 30-minute documentary with funds provided by Morgan Freeman. The documentary takes viewers to Wrenn’s home and captures him in his element with painting. The documentary, which is called Mo with Joe, has been entered into the Oxford Film Festival for February 2016.

Wrenn’s paintings will be featured at City Grocery through January 2016. They are available to purchase. 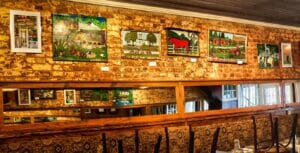 “Joe’s paintings have been bought off walls before and taken to places like Boston, New Orleans, Tennessee and Texas,” Callendar said, “Having them at City Grocery is great for out of town visitors who cannot make it to art shows and want to buy his paintings and take home with them immediately.”

Emily Newton is the staff writer and magazine editor of Experience Oxford. She can be reached at emily.newton@hottytoddy.com.