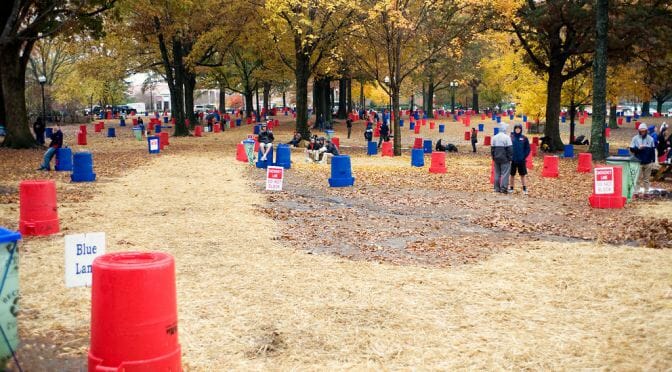 If you live in the United States, you may recycle. Those who do, know all about separating their plastics, glasses and metals. They rinse the bottles and cans, and some even put scraps in a container destined for a composting facility.

Some say recycling helps the community and protects the environment. Others wonder if it’s a waste of time.

As a record number of freshman moved into the University of Mississippi residence halls in August 2015, the university collected and recycled more than 25 tons of cardboard, according to Oxford Recycling Department.

A collaborative effort across campus, recycling initiatives at the university include providing bins in buildings and outside at sporting events. Broken, abandoned bicycles are being rebuilt as well. The university recycles paper, cardboard, aluminum, steel cans and certain plastics.

Anne McCauley, assistant director of the Office of Sustainability, joined the office in October of 2009. She works on efforts to move the Green Initiative forward everyday.

McCauley lived in Washington, D.C. prior to moving to Oxford. She worked at a nonprofit half of her life there and on a planning an environmental communication campaign at George Mason University.

“We want recycling to become a part of everyday life,” said McCauley.

Currently, the university is looking to install a second drop-off location.

“The Office of Sustainability is charged with the responsibility to make the university more sustainable,” said McCauley. “We have a lot of programs in which we are trying to integrate recycling inside and outside the classrooms.

“Awareness is the key component. Anytime someone is bringing your attention to different options about discarding waste, it helps with that awareness,” said McCauley.

India Welton, a member of the Ole Miss Track & Field Team, is now a junior, and since August 2013, she has been a pole-vaulter for the university.

She has been part of other organizations on campus as well. However, her favorite organization is Students For a Green Campus. She said they work hard each year to make the Ole Miss campus as “green” as possible.

Ole Miss Students For a Green Campus work to further the sustainability of the campus by promoting “green” living through recycling, conservation and knowledge.

Within the organization, members work with other students and the Oxford community as well to promote a more sustainable way of life.

“Back at home in Alpharetta, Georgia, mostly everyone I knew took recycling serious,” said Welton. “From school to church to daycares to just about anywhere near – recycling was a big deal.

“My family and I would recycle very often. My neighborhood had three different trash cans at each house – one for trash, one for plastics, and the other was for paper/cardboard.”

The university has had many events for students on the Ole Miss campus. However, attendance has not been so promising. The UM Garden Club, Ole Miss Green Initiative Club, and the Office of Sustainability have all planned events to take action for a greener campus.

“Since I started college, I began to lose my habits of recycling because it has not been instilled in my head for almost three years now,” Welton said. “I am often in a rush, or the recycling bin is just so far away from the nearest trash can as us students are walking to and from classes.”

Kevin Smith, a junior at the university from Clarksdale, studies exercise science. He enjoys volunteering for numerous things on campus, such as donating blood.

“I need proof, proof that recycling is saving our environment,” he said. “I need hands-on proof. It is not that I do not believe recycling is important, but sometimes recycling seems like a huge inconvenience, and it is so much easier to just throw the trash away in a regular trash can.”

From increases in sustainable projects and campus events to new collaboration between administrators, faculty, staff and student leaders, they have managed to offer evidence that they are working each day to make this campus “green.”

“We want people to no longer feel comfortable to throw trash or anything on the ground,” said McCauley. “We want littering to feel unnatural. Adding ‘no littering’ to your daily routine should feel great after a while so that it would feel so awful to throw anything that could be recycled in the trash period.”

Article by Kennedy Johnson with OxfordStories.net.