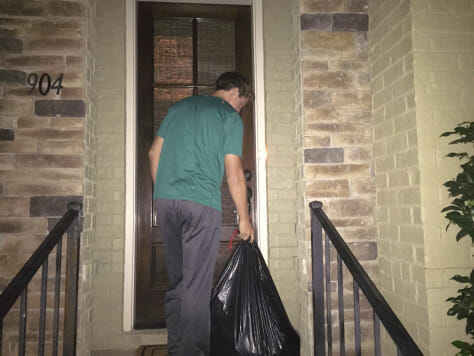 One man’s trash is another man’s treasure, and Ricky Malone, a part-time student and part-time entrepreneur, is turning trash into cash.

The junior UM student from Gulfport has created a trash removal business. He started his company One Toss Garbage Removal Service in June of 2015, but it became an official business in August 2015 after obtaining a business license, a sole proprietorship and liability insurance.

One afternoon, Malone and a few buddies were sitting on the couch in their apartment brainstorming about ways to fill their empty pockets.

“In my previous apartment complex, I kept getting fined for leaving the trash on our doorstep, and my parents were not paying another ticket,” Malone said. “We came up with the idea to save other people from getting fined by removing their trash from their doorsteps and putting it in the dumpster.”

Malone’s next step was to get his company approved by Oxford Mayor Pat Patterson.

“We wanted the business to be legitimate, cross our Ts, and dot our Is,” he said. “After going back and forth with the city of Oxford, we finally got approved.”

From there, Malone began handing out flyers to different sororities, apartment complexes, and fraternities throughout Oxford. After that, his phone did not stop ringing.

“I was shocked about how many phone calls and texts I got from people all to remove their garbage,” he said. “It started with five customers and just kept growing and growing. It was amazing how many people were signing up. I had no idea who they were, because at first, it was just my friends.”

Palmer Barefield, a sophomore IMC major at the University of Mississippi, said the service is convenient.

“It is so nice to just be able to drop the trash outside my door and not have to worry about getting a fine from my complex,” she said. “The guys are quick and efficient, and the service is great.”

Although business has been great for One Toss, Malone has faced obstacles and problems.

“Biggest thing was to get One Toss approved by each apartment complex in Oxford,” he said. “This was crucial because the main focus was to ensure our customers would no longer receive fines for leaving their trash out.”

“Right now, One Toss has over 100 customers, and it’s still growing,” he said. “Our next step is to set up a website to make it easier to fill out and sign our legal contract, because it’s difficult to find a time where all roommates are home at once.”

On Sunday, Tuesday and Thursday, the One Toss crew makes their way around Oxford and begins picking up the trash at 5 p.m.

“Right now, we use two pick-up trucks and divide the six apartment complexes into two separate routes,” he said. “We stop at all of our customers’ doors, grab their trash, throw it in our pick-up truck, and drive it to the complex’s dumpsters.”

Malone believes that One Toss is growing and making improvements every day.

“The long-term goal for this company is to provide a reliable and efficient trash removal service to the Oxford area,” he said. “Once this is accomplished and we have everything worked out – all the little kinks – we plan to expand to other universities.”