Sight of snowy winter mountain tops, dry summers and perfect hiking trails were lost when Zach Raub moved to “the other side.”

Raub is from Denver, Colorado, and until this past spring, he had never set foot in a region of the United States where summers are humid, and fried chicken is constantly served.

The South became a part of Raub’s everyday life when he decided to attend The University of Mississippi for graduate school. Soon after he was accepted in May 2015, he packed his belongings, leaving behind his ski jackets and snow boots and ventured down south.

“I wouldn’t be here without my girlfriend, Haley,” Raub said. “We met last winter in Denver during our accounting internship at Ernst & Young.”

Raub said he was the first in his family to complete college. His parents were proud of him for not only finishing his degree at the University of Colorado in Boulder, but for pursuing his education at the fourth ranked accounting school in the country.

The first time Raub visited Oxford last spring, he flew into Memphis. His girlfriend, Haley Harriman who is a graduate student from Dallas, Texas, picked him up and they spent their evening on Beale Street where he ate southern BBQ for his first time. He said there is nothing like country-fried steak and pulled pork sandwiches in Denver.

“I’m almost positive I have packed on a few pounds since I’ve been here,” said Raub. “I could eat Ajax every day if I let myself.”

Raub explained how happy he was to meet his girlfriend last winter, and she talked him into coming to Ole Miss for graduate school with her. He said he knew it would be different, a major culture shock, but adjusting wasn’t difficult for him. 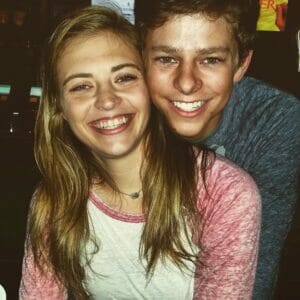 “I prepared myself that coming to a small town in the middle of Mississippi, a state I’ve never imagined living in, would soon be my home,” Raub said. “But, I constantly told myself, ‘I’m here for my girlfriend and to earn my masters in accounting.’”

“If I had to predict my life a year ago, I would have never imagined having my boyfriend less than two miles down the road from me and completing our masters together,” Harriman said. “Who knew I could be so persuasive to get a Colorado boy down to my side of the country.”

Raub said change was never an issue with him. He knew once he made his decision to move hundreds of miles away from his Colorado bubble and away from his family, there would be a positive light on the other side.

“I knew what I did was something that many people would never have the opportunity to do, which pushed me more towards the move,” Raub said. “It was probably the most spontaneous thing I’ve ever done, but even after living here for almost four months, there isn’t a negative bone or thought in my body about my decision.”

Raub said the culture of the South has become a part of his life and always will be.

“I couldn’t be happier to be living in Oxford, Mississippi.”

Merrill Kaufman is a senior print journalism major at the Meek School of Journalism and New Media. She can be reached at mpkaufma@go.olemiss.edu.