Rifle is often considered an individual sport, but at Ole Miss, head coach Valerie Boothe and assistant coach Melissa Quartarone have enhanced the importance of coming together as a team.

“It is an individual sport, but we make it a team atmosphere,” Boothe said. “They each bring their individual strengths, but at the end of the day, they are working together to get done what we as a team need.”

“This group is filled with talent,” Quartarone said. “They have the love and grasp for the sport that you look for in an Olympic athlete.”

Quartarone described the team of girls in three adjectives for both on and off the range.

“They are overwhelmingly positive,” she said. “They always look at moving forward instead of dwelling on defeat; they are competitive, not only with everyone else but with themselves, and they are dedicated not just as rifle athletes but to Ole Miss, to their education and to each other.”

Its not only the team’s qualities that make it stand out, but also the significant number of freshmen who make up the team. This year, out of the 13-woman roster, seven of them are freshmen.

All of these freshmen look to be prospects. However, these two have already made a mark in the eyes of their coaches are freshmen Harley Gardner of Bellville, Texas, and Samantha Sandifer of Florence, Mississippi.

“Harley is already an established freshman,” Quartarone said. “She is shooting the course that we need, and she is already someone we heavily depend on. But Sam is completely unexpected and is definitely up and coming. She’s a hardcore competitor, and she brings a lot of fresh blood to the program.”

Gardener and Sandifer give their outlook on what it has been like for them being part of the team thus far.

“At home I didn’t have a team base,” Gardener said. “I need guidance; everyone does, and I wasn’t getting that at home, so just having a team to work with and run drills with helps a lot.”

“Everyone supports everybody,” Sandifer said. “We hold each other to higher standards and try to push one another to be the best we can be.”

According to Sandifer, the range isn’t the only place the team really comes together. 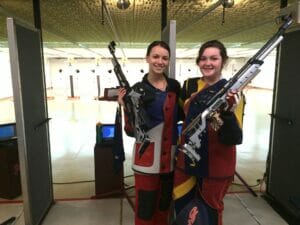 “We all sit together at football games, we grove together, we have team dinners and our ‘group-me’ is always going off. We pretty much do everything together.”

Victoria Lanza is a senior broadcast journalism major at the Meek School of Journalism and New Media. She can be reached at vglanza@go.olemiss.edu.