I’m not much of a hunter. Hell, I’m not a hunter. I will hunt when friends call and ask me to go. Maybe.

I’ve been like that all my life. I’ve always enjoyed every trip of coon hunting, deer hunting, squirrel hunting and duck and dove hunting but I’ve never needed, desired nor made a hobby of hunting. But that may change soon.

And, I knew it would change when my son started shooting BB guns and playing with knives while talking about shooting different game in the woods surrounding us. I mentally prepared myself on being ready to hunt when he got to of age, but not physically for his needs in gear and guns and hunting boots and other things. I haven’t prepared for my daughter who I thought would never hunt a day in her life either.

I got a call about five weeks ago from J.J. and T.R. asking if I wanted to bring my kids to their deer camp for the opening week of Youth Season. My immediate answer was yes. They told me each kid will need an adult to go with them and I instantly considered telling their grandfather, Grandy, about this adventure.

Their grandfather is an avid deer hunter and an outdoor sportsman. He would be a perfect guide for Maddux on his first deer hunt. And I’d be perfect for guiding Rilee on her first trip to an inconspicuous deer stand to hunt in the woods. We confirmed dates and times with a yes; the wait and excitement is in the air. I knew I wasn’t prepared…

Before our weekend adventure as guests at the deer camp, we made and purchased in preparation. Fathers and members of the hunting club we were visiting have rode tractors to clear the paths to certain stands. They have planted Rye grass for food plots that the deer love. They checked deer stands and killed wasps. New box stands to sit in above the grounds were built, and the cabin was clean and neatly decorated with deer head mounts, pictures and other memories.

My children’s grandparents have bought them camouflage shirts, pants, coats, muck boots, backpacks, bib coveralls. And the most favorite gift is a 7mm-08 gun for Maddux. Suspense built inside me, and I appreciated everything with a sense of wonder.

We made it to the camp late Friday night without Rilee in our entourage. She opted out for her Mimi and two first cousins to have a slumber party with. I wanted her to come with me but I’m not gonna force this hunting stuff on her.

She really doesn’t understand the whole hunting thing yet either; she’s only seven. But, she has promised me she will show up and hunt with me the next afternoon. And so I was fine as we climbed out of our trucks to greet friends and members of the hunting cabin.

We all sat around and talked as we discussed the morning’s hunt. Little boys and little girls ran under the dark trees and played games in the night until it was time for bed; time for them to rest and focus on the hunt we all came to do. Everybody went to bed except for me and a friend of mine. Kids were tucked away in pillows and sleeping bags with nerves of what they’d see in the morning through a Bushnell scope.

Andy and I stayed up and talked and laughed on the front porch of the deer camp. I could get used to this front porch…

Youth Season was a success. Neither one of my kids bagged a deer but I think a certain kind of bond was built. I got to hunt with each kid separately and enjoyed each reservation. I know that Maddux is serious about hunting and Rilee is not. 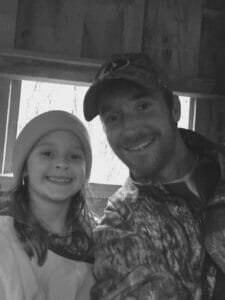 He was focused, somewhat quiet as he scoped the area we hunted in. Rilee was talkative, somewhat charming as she made me scope the land.

I wonder when he turns sixteen, when he’s not considered a youth then, if he’ll still hunt with me. I already know that answer: he won’t. I’ll have to hear his hunting stories around the campfire that he would tell as we all come back from the woods and gather by the warm fire with our boots propped above it.

I also wondered if Rilee will hunt with me when she is sixteen, and I think she will. She’ll still talk a lot and make me laugh and hopefully not fart really loud in our stand.

I loved how the weekend folded out into my eyes. Maddux led me into the woods that first dark morning as no light shone on our faces and then Rilee ended the next morning by leading me out when the day was bright, the grass was green and the woods covered in colorful falling leaves.

My children are so different in their ways and wants: they are so imperfect and perfect through my scope I hunt through. I hope they keep on hunting. I hope they still make me laugh and think. I hope I do the same for them. And mainly, I hope we hunt again soon.

Shane Brown is a HottyToddy.com contributor and the son of noted author Larry Brown. Shane is an Oxford native with Yocona and Tula roots. Shane is a graduate of Mississippi State University. He has two children — Maddux, age 9, and Rilee, age 7 — and makes his home at “A Place Called Tula.” He can be reached at msushanebrown@yahoo.com.