One of the most popular sushi restaurants in Oxford is actually right inside the Kroger. 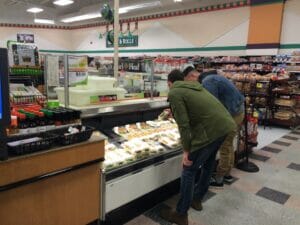 Locals regularly line up for grab-and-go and custom rolls made by the on-site sushi chef. Five dollar sushi Wednesdays are particularly popular, but with median prices landing around $7 per specialty roll, you can usually find a deal any day of the week. And Hissho fans will soon be in for a treat when the sushi bar’s hot food concept called Hissho Asian-To-Go is added to the Hissho Sushi bar during Kroger’s expansion in 2016.

The forthcoming Hissho Asian-To-Go hot food concept has already open in two Delta locations if you’re itching to sneak a peek at what’s to come—one in Starkville and the other in Memphis.

The offerings at Oxford’s Hissho Asian-To-Go will include Japanese Ramen noodle bowls and traditional Asian entrees.

Hissho’s Asian-To-Go rice entrees will include a choice of white/brown/fried rice or yakisoba noodles and will be served with a crisp cabbage slaw drizzled with Miso Ginger dressing and a side of Asian Sesame Greens, according to Joanna.

“Our entrees include an authentic Japanese Gyudon beef dish, which is made from thinly sliced beef cooked with savory onions and ginger,” she said. “Hissho also offers a traditional Asian staple of grilled teriyaki chicken, and for those who want tempura chicken, the Sriracha Orange chicken will offer a balance of both sweet and spicy flavors.”

Hissho Sushi, which has been a partner with the Kroger Co. for 15 years, opened its Oxford Kroger location in January 2008. The popular Hissho Sushi bar is now found in 869 supermarkets, cafes and universities in 39 states plus the District of Columbia, according to Andrea Lee who handles corporate communications for Hissho Sushi. 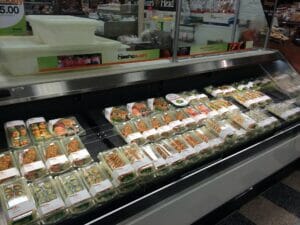 “The sushi sales in Oxford keep growing year over year as Hissho’s product is a huge hit with the students and is a great grab-and-go dinner solution,” Andrea said. “The most popular types of sushi sold by Hissho inside Oxford’s Kroger are Crispy Crab, Southern Charm, Bento Boxes, Sriracha Party and Dynamite Roll, with about 25 percent of sales coming from made-to-order sushi.”

The Hissho Sushi bar is open daily from 11 a.m. to 7 p.m. inside Oxford’s Kroger.

Liz Barrett Foster is the EatingOxford editor for HottyToddy.com, an award-winning business journalist, and author of the recently published Pizza: A Slice of American History. Liz has run the popular restaurant information site Eating Oxford since 2009. Liz can be reached at liz.foster@hottytoddy.com.