Vasallo: 1955 Sugar Bowl Was All Navy 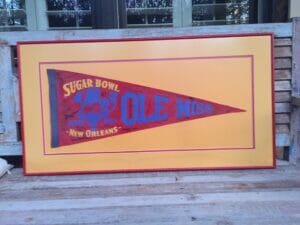 We’re not referring to the “color of the day” as the Naval Academy dropped anchor on the slightly favored Ole Miss Rebs 21-0. The Midshipmen  had two losses coming into the bowl (Pittsburgh and Notre Dame)  with the Rebels winning the SEC under the leadership of John H. Vaught with a 9-1 record, only losing to Southwest conference Arkansas 6-0.

The Navy quarterback, George Welsh, inspired his team greatly that day with the right calls time and time again. Navy was a much smaller team (physically) than Ole Miss, however, continuously showed the Rebs different looks on defense (14) which baffled the Reb offense all afternoon. Eagle Day was one of two quarterbacks used by Coach Vaught that day.

The Navy coach, Eddie Erdelatz, said following the game that the difference was “desire” in who wanted it the most. The Rebels led the country in total defense in 1954 and were fifth nationally in offense. The Ole Miss players had been hoping for a rematch with Arkansas in the Cotton Bowl which was nixed by Razorback Coach Bowden Wyatt. Arkansas ended up playing Georgia Tech in the Cotton Bowl, losing 16-14 and finishing tenth in the AP poll. Ole Miss finished sixth in the AP following the loss to Navy.

The 1954 season had been an interesting one for Ole Miss as that year opened on Friday, September 17 with a win over the North Texas Mean Green 35-12. The Rebs shut out three opponents that season: 52-0 over Villanova; 14-0 over Mississippi State and 26-0 over Houston.
After a grueling victory over Army (27-20) Navy became the first service academy to play in a bowl since the 1924 Rose Bowl! Navy initially had been picked as a 3 point favorite to prevail in the Sugar Bowl until two key injuries occurred, making Vaught’s SEC champions favorite by one and a half. Vaught had predicted in the press that the Rebels would win the game. Not to be.
Social change was in the air that day in New Orleans in addition to football as the Sugar Bowl tickets stated “for use by white patrons only and that others were subject to ejection.” After a formal complaint by the NAACP to the Secretary of the Navy, the Secretary replied that 13,000 tickets had been distributed without regard to racial restrictions.

The Sugar Bowl president concluded the debate declaring  “The Navy statement speaks for itself and no other comment is necessary.” Case closed.

Footnote: The pennant featured with this Write-up was found in an antique shop in Chicago that was signed by most Ole Miss players. Purchased by Larry Meek, it was given to older brother Ed who has since passed it down to grandson, John Hale Houston.
(Acknowledgment to the Sugar Bowl archives for information relating to the 1955 bowl game.)

Vasallo is a certified economic and community developer and is also a realtor with Premier Properties of Oxford. Steve graduated from Ole Miss and his lifelong dream has been to live in Oxford full-time. “I am now living my dream daily as is my wife Rosie, who works with the Oxford Chamber of Commerce,” Steve said.