Ole Miss alum and Afghanistan warrior Justin Haynes, who was killed in an car accident early Saturday morning, will be put to rest at 2 p.m. Monday in Oxford.

Haynes proudly displayed the Ole Miss flag on the battlefield in 2011 with another Ole Miss grad seen in a photo that was shared by millions around the world.

CPL Justin Sanders Haynes, 26, owner of Montgomery & Co. Pumping, LLC, went to be with his Lord and Savior Saturday, Jan. 10, 2015, in Oxford. The funeral service will be Monday, Jan. 12, 2015, at 2 p.m. at North Oxford Baptist Church with Dr. Laurie Jones officiating.  Burial will follow in Eastover Memorial Cemetery in Oxford.  Visitation will be Sunday, Jan. 11, 2015, from 2 p.m. until 6 p.m. at Waller Funeral Home and again, prior to the service, beginning at 1 p.m. at the church.

Born in Clarksdale, Justin was a veteran of the United States Marine Corps where he recently served his country in Afghanistan for Operation Enduring Freedom.  He was a member of Marks Presbyterian Church and a graduate of Delta Academy in Marks. After attending Ole Miss, Justin called Oxford his home but never lost his love for the Delta where he grew up to appreciate the outdoors, especially hunting and playing sports.  He was a confident athlete and his family jokes that if you had any doubt of his ability, Justin could set you straight.  He will be remembered as a natural born leader, on and off the battlefield, and was fiercely loyal to his family and friends.

“In fact this photo was the most popular ever posted on Forever OLE MISS,” Cofield said.

Here is the HottyToddy.com story posted on Dec. 4, 2012, the text of which was as follows:

Ole Miss alumni display their Rebel pride wherever they are. Even if they are in the middle of a war zone. 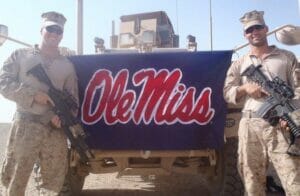 Here University of Mississippi boys Eric Nix, Phi Delt from Jackson, and Justin Haynes, Sigma Nu from Marks, show their Ole Miss spirit while serving in Afghanistan. The two Mississippi natives served with Bravo Company 1/23 in Afghanistan in 2011. The photo was taken at a Marine patrol base in Helmond Province.

“We had just gotten up that morning, and we were getting ready to go out on patrol,” said Haynes, who now resides in Oxford. Haynes said he and Nix had Internet access at their main Camp Dwyer base in Afghanistan that allowed them to check scores and keep up with Ole Miss football while serving in the military.

“While we were in Afghanistan, we sent a letter to Jared Plummer, one of the team trainers at the time, saying how much Rebel football meant to us and how much it made us appreciate home. It wasn’t too long before we received the flag in a package from Ole Miss Athletics.”