Truth is like the sun. You can shut it out for a time, but it ain’t goin’ away.
-Elvis Presley

Elvis was most definitely Photoshopped in the picture HottyToddy.com posted yesterday (attached below). Period. No question about it. End of discussion. 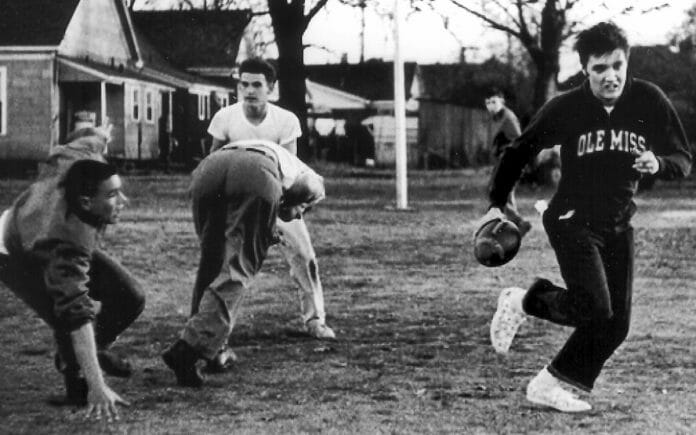 The debate – such as it is – is whether the Ole Miss text (logo) was added to the photo or whether it was “subtracted” (cloned out) of the original photo. Either is a possibility.

Your response has been tremendous. Some say that the logo was definitely added (rather recently, in fact, considering the font). Some think it was deleted (probably by a disgruntled Mississippi State or LSU fan). Some of you HOPE Elvis was a Rebel fan and don’t care about the logo. A few could care less either way and fewer still think his loyalty was with State (considering Elvis was from Tupelo – a community that leans fairly heavily pro-State).

As a designer, I’ll say this: I’ve researched the photo extensively (actually it’s a GROUP of photos – visit VintageEveryday.com) and it’s apparent that the logo was ADDED to a scan of that single original photo. None of the photos that I found in the set have the Ole Miss text. That, in and of itself, would be a fairly extensive Photoshop project (if someone went in and cloned out Ole Miss in every photo, which is unlikely).

Additionally, we need to wrap our heads around this little tidbit. According to Vintage Everyday, the photos were taken at Dave Wells Community Center (not a backyard as we were told by a source) on December 27, 1956 (making Elvis approximately 21 years old), and there was a huge audience watching the game. Obviously at the time, Elvis had already climbed the first few rungs of his ladder to worldwide fame. I’m not sure about everyone else, but when I strap on my PF Flyers and generic navy blue hoodie for a pickup football game, exactly zero people come to watch.

Why this was done and when is a mystery that may never be solved. However, if the above is true (the addition of the logo in the one photo), I have to admit that the Photoshop effort was commendable since, it seems, the text flows, angles and creases rather naturally across his chest. But that is neither here nor there.

Elvis was Photoshopped and that, my friends, is Photoshop abuse at its finest (regardless of the university loyalty of the Photoshopper). Actually, it could even be considered sacrilegious to some considering the subject.

And lastly; HottyToddy.com received an email from Elvis historian, Cory Cooper, who stated simply, “Elvis would have been 15 in 1950 and he looks a little older than that to me. Also, Elvis moved (away) from Tupelo in 1948.”

Why is this significant? Well, our “source” from yesterday wanted credit for the photo insisting that the family owned it, that it was taken in the source’s grandmother’s backyard in 1950 and that the Ole Miss logo was definitely on his chest that day. Our friendly historian above politely and concisely asserts that this can’t be true because there’s no way Elvis was 15 years old in this photo. Actually, none of the players are.

Why, you ask, should we believe a supposed “Elvis historian” when, quite possibly, someone claiming to own the photo has already tried to dupe us? In response to that, I offer these credentials for Mr. Cooper:

“Renowned Elvis Presley Historian, Cory Cooper, is a noted authority on the life and music of Elvis Presley who regularly contributes to books, radio, movies and television projects. Cory has also worked with documentary director John Scheinfeld. Cory has appeared on countless nationally syndicated radio programs across the United States, Canada, England and Australia, including Coast to Coast with George Noory and MSNBC. Additionally, Cory has been a contributor to Internet and local radio, a variety of Elvis publications, print media and been a contributor to E! Entertainment Online, USA Today and the Huffington Post. As a sought out authority on Presley, Cooper draws from his vast knowledge and his deep ties to others in the Elvis world. Included among his contacts are authors, band members, performers and members of the “Memphis Mafia,” the close group of bodyguards, friends and employees that worked with and protected Elvis Presley. Cooper is available for radio, television and film as well as commercial and voiceover work. As a gifted speaker on the topic of Presley’s life, he is available for corporate functions, special occasions and public appearances.” 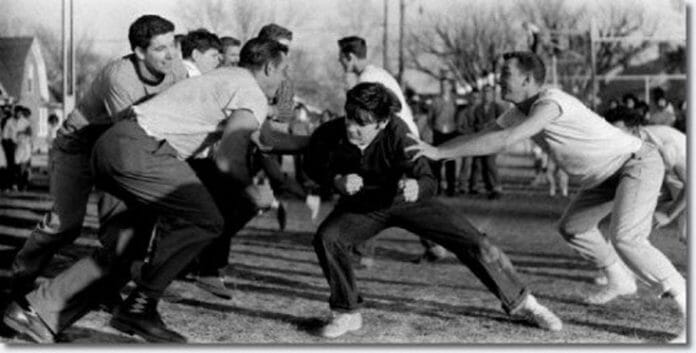 Jeff McVay is a staff writer and graphic designer for Hottytoddy.com. He can be reached at jeff.mcvay@hottytoddy.com