Insider Tips For the Oxford Film Festival This Week

So, you hear and see months and months of Oxford Film Festival (OFF) coverage via virtually every news outlet and social media platform on the planet and you think… “Way cool! I’m going.”

And, you go. You make the short trek to Malco Oxford Commons Cinema and you cross your fingers hoping that: No. 1; you’re at the right Malco Theater and No. 2; you’re there while films are actually being screened (because OFF festivities are sprouting up all over town – parties, virtual reality opportunities, concerts, panels, et cetera).

You park close. You shuffle to the front door with hundreds of familiar faces. You enter, dig out your wallet, don your lanyard… and then what?

I’ve covered several (seven I believe) of these festivals and – quite frankly – they can be somewhat intimidating. There’s a lot going on: Red carpet walks, camera flashes, video cameras on tripods, Morgan Freeman cruises by, James Franco and his entourage cruise by, filmmakers and other stars gather in herds, ensembles playing, lines at concession stands and lines at the entrance of individual theaters within the theater (and, most definitely, lines at the bar). Dangling lanyards, tons of volunteers, programs being read on the fly, heads down-heads up, scrambling and vying for a place in line… and then; finally, a seat. Deep, deep breaths… RELAX, WATCH and REPEAT.

At HottyToddy.com, we’ve decided that a crash course – Film Fest 101 of sorts – is in order since the Oxford Film Festival is literally on our front doorstep (OFF begins on February 17).

First and foremost: Film Festivals (like golf) have unspoken rules of etiquette… like these (below) that you may or may not have learned in kindergarten:

Roadragers beware because You WILL experience lines at the film festival; lines for concessions and booze as well as lines for seats. Heck, you may not even get into the particular theater you want. But, R-E-L-A-X because according to OFF executive director Melanie Addington, “Many of the films play twice, and there is a contingency plan; if a film sells out and some folks who were in line don’t get in, they’ll get first priority seating for the next screening.”

Let’s say you manage to squeeze in a particular theater for a “block” of films. All this means is the films in the block are considered “shorts” (under 1-hour according to Addington) and they have a common theme (food, animation, music videos, et cetera). Now let’s say the film you are inclined to see is first in line for that particular block. Protocol (and common sense) dictates that you remain in your seat throughout the blocked off time even though you’ve accomplished your mission to see the No. 1 film. Heck, there’s a chance you’ve invested only about seven minutes in the seat you fought so hard to obtain for an hour or more. Just stay there because chances are good you’ll find another jewel or two within the remaining films in the block. And, let’s face it, filmmakers attend OFF in droves and one of those filmmakers could likely be sitting right next to you. Put yourself in his/her shoes as you abruptly squeeze by to avoid viewing a project he or she spent a lot of blood, sweat and tears to produce. Give them all (the films) a chance and it’s guaranteed, you will be rewarded.


Addington offers these thoughts on the issue, drawn from a lifetime of attending and producing film festivals:
“Often features (over an hour really) stand alone and play by themselves, but sometimes we pair a short with it because it fits the theme. If you only want to watch the short and not the feature, yes, you can leave; just try to not be disruptive as you could be sitting next to the feature filmmaker as you walk out… so keep that in mind. The schedule online and in print shows which films are in each block, so it is easy to see which film plays with which by checking that out. They are listed in the order they will play.”

But, what should you do if a film you’re viewing just isn’t “doing it for you?” Addington concedes that this happens and shares this thought:
“One cool benefit of a film festival is that if you absolutely realize a film is not for you and you choose to leave, there are six other films playing at the same time that you can give a try. At film festivals, I always try to have a Plan A, Plan B and then end up going with Plan C.”

• Attend OFF in pairs or very small groups.

This unspoken rule falls into the realm of common sense rather than etiquette. I attended one year and I was forced to sit across the theater from my date when we went to a packed house presentation of Sunshine Cleaning featuring Amy Adams, Alan Arkin and Emily Blunt. She and I would try to make belly laugh gestures at each other from about an acre away during the film… worst first date ever. I often wonder what she’s doing these days.

The bottom line: large groups have little to no chance of sitting together during features or blocks of films (but miracles can happen), regardless of what’s showing or the size of the theater. All of you can, however, meet afterward for drinks in the lobby to map out your plan of action for the rest of your festival experience.

• Stay for the Q&A with the filmmaker after a film’s completion. 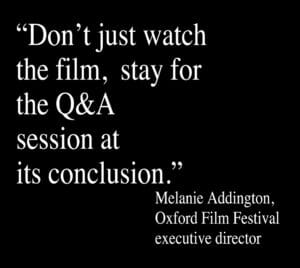 Addington is passionate about this subject and offers this:
“Don’t just watch the film, stay for the Q&A session at its conclusion,” she said. “It is an absolutely critical part of a festival when attendees get to engage with the filmmaker and ask about their choices to tell a story. So many people leave before the Q&A but why would you when you have the opportunity to talk one-on-one with the filmmaker about their process?”

Here are other film fest topics which may be of help for rookie attendees:

• What’s the Green Room and who is it for?

“The Green Room is basically off-limits to members of the general public unless they buy a VIP pass,” Addington said, “But I guarantee, some filmmakers will be hanging out at the bar in the lobby more than the green room so there will still be a chance to meet folks.”

• Speaking of VIP passes; what are the benefits of purchasing a pass as opposed to a general admission ticket?

You get to be in the first line for each film and get to be seated first before weekend, day or single ticket holders.

A VIP pass allows access to private parties not listed publicly on Thursday, Friday and/or Saturday. Two parties of the five are considered “public” and tickets can be purchased for those.

It also gets you access to the Green Room to rest, charge your phone, get a massage (during set hours) or get some food. “Food is not a guarantee but there are sponsors who donate so there is usually something in there to snack on,” Addington said.

And, possibly the most important tip that we can pass along is:

SECURE A PROGRAM BEFORE THE FESTIVAL AND STUDY IT EXTENSIVELY!

How’s this for a dilemma; on film festival Friday morning through mid-afternoon, I need to clone myself like Michael Keaton in the 1996 film Multiplicity. Why? Because I need to be at the Shelter on Van Buren, the Oxford Conference Center, the Powerhouse and Malco Oxford Commons Cinema all at the same time.

During that timespan, the Shelter is screening an OFF Animation block; the Conference center is featuring Documentary Shorts; the Powerhouse is showing Relationship Shorts (an urgent and perpetual need of mine); and Malco Oxford Commons has a little of everything including Experimental Films and Southern Shorts. All of these run concurrently, which is forcing me to search for alternate screening opportunities for each.

The only way I know any of the above is because I just picked up an OFF schedule at the Powerhouse showing film listings for the entire festival. In that program (pages 30-31) there is a print schedule where attendees can go “old school” and highlight where they need (or want) to be.

According to Addington, programs are available at the Shelter on Van Buren and the Powerhouse as of this writing, and she can’t stress enough the importance of doing your homework, pre-festival. Otherwise, you’ll likely be making belly laugh gestures across a theater at a girl you’re dating for the first time.

A better option (according to Addington) is use the built-in app on the OFF website (or visit Sched.org) that allows you to see the mobile version of the OFF program on your phone. It will also “auto add” your festival schedule to the calendar on your phone. You can either view all events on the program or pick what you want and simply have only those on your phone display.

Either way… DO YOUR HOMEWORK PRE-FESTIVAL.

Other random thoughts and festival hints:

Can the public simply walk up to the ticket office and purchase a ticket?

According to Addington; “Absolutely!” One-day passes and “single block” passes are the lowest denomination and prices vary according to the day and status of the purchaser (adult, child, student, senior, et cetera). Weekend passes, VIP passes, party passes, passes for single blocks of films… the list goes on and on… are also available.

Our advice: Visit the OFF website (OxfordFilmFest.com) and click the “FESTIVAL” tab, then scroll down to “TICKETS 2016” and settle in for a spell as you scroll through the options (of which there are many).

Are patrons allowed to take photos?

Another “absolutely!” response was given by Addington on this issue. And, news to us was that OFF encourages shares and hashtags. “Put them (your photos and videos) on social media and use our hashtag #oxff and tell everyone you are having fun,” Addington beamed.

Is the film festival kid-friendly? 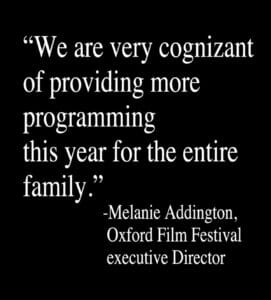 “Kids are encouraged to attend,” Addington said. “We have an overflowing kids filmmaking workshop on Saturday morning (Feb. 20). There is also a panel on casting kids set for Saturday at 12:15. In the back of the printed guide, there is a genre list that notes if a film is family-friendly so that parents can decide. The bottom line; we are very cognizant of providing more programming this year for the entire family.”

What about OFF panels? Are attendees encouraged to attend?

Addington gave yet another resounding “absolutely!” regarding this topic.

“Working with Mississippi Humanities Council, OxFilm Society and Independent Black Film Collective this year, we made all panels free to attend for just this purpose,” Addington said. “Attendees of the festival, community members, film fans, film students, et cetera, are encouraged to attend these panels with industry people to learn more about a variety of filmmaking areas.”

There you have it, folks. Film Festival 101 and we barely scratched the surface of this intricate and prodigious event – the thirteenth in fact.

Oxford Film Festival organizers and volunteers are numerous – locked and loaded and excited to direct you through the maze.

If you show up at OFF between February 17-21, you’ll be in very capable hands. However, we – just like OFF administrators – encourage you to track down a schedule ASAP and do your homework.

Or better yet, get busy online at OxfordFilmFest.com

The 2016 Oxford Film Festival will take place February 17-21 and will be held predominantly at Malco Oxford Commons. Programs are available now at the Powerhouse and Shelter on Van Buren on the Oxford Square.