In the 1960s racism overtook the South like wildfire.  Although these were troubling times, Murry Patton went against the odds and took the position as the first African American University of Mississippi Police Department officer at Ole Miss.

“When they approached him to be a police officer, he never thought of it before- they came out and found him for the job,” said Lula Patton, Murry’s wife.

According to his family, Patton was born in Oxford, Mississippi, on Feb. 11, 1933, to the late Bertha Patton, and was a “jack of all trades.”

“He meant what he said and said what he meant,” said Sharon Certion, daughter of Mr. Patton.

Patton married Lula “Peat” Patton in 1950.  Mrs. Patton said they were grade school sweethearts and had known each other their entire lives. The couple grew up a short distance from each other and their families were close. That Patton’s were married 57 years and had five children together.

“He always had aspirations to do better and make money to take care of his family,” said Mary Patton-Jared, daughter of Mr. and Mrs. Patton.

Mr. Patton worked in the crop fields by day, and by night he patrolled the Ole Miss campus as a UPD officer. 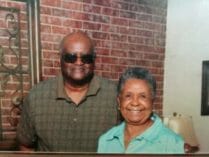 “We faced many hardships,” Lula Patton said. “Most of the time I would have to be mom and dad when he was at work.”

According to Mrs. Patton, her husband did not have any experience with the police force at all, especially due to the highly racial times of the 1960s.

In 1962, when James Meredith, the first African-American student to enroll at Ole Miss, Patton was a custodian on campus. Patton faced problems with white students and workers on campus, according to his family. Although, some of the white students did not respect him, most did and in 1969, he became the first African-American UPD officer at Ole Miss.

The most dangerous times during Patton’s time serving for UPD were the bomb threats.  He, along with fellow officers, had no training with finding bombs. In fact, Patton’s job description included patrolling the campus and keeping it safe, escorting the football team to the field, patrol basketball games and guard cheerleaders and baton twirlers.

Apart from being recognized as the first African-American UPD officer at Ole Miss, Patton has a long list of achievements under his belt.  Upon serving his family and community as a UPD officer, Patton also took courses at the university.

More achievements included serving as a volunteer firefighter for Lafayette County Engine No. 15 and gaining recognition for his leadership with the fire department.  He also became a member of the Masonic Lodge 16, and served on the Deacon Board at West Springhill Missionary Baptist Church in Oxford, Mississippi.

Patton’s reign as the first African American UPD officer was recognized when he retired in the year of 1988.  Patton retired as a Lieutenant and had been on the police force from 1969-1988.

Italiana Anderson is a intern for hottytoddy.com and a student at the Meek School of Journalism and New Media. She can be reached at iganders@go.olemiss.edu.