Donna Howard likes to say she quit her old job only to make half the money and work twice as hard. But she wouldn’t have it any other way.

She is now the executive director of Holding Hands, a consignment shop she opened on West Oxford Loop in January of 2013 that employs people who are mentally ill. Although the store has been in business for only three years, Howard’s journey began long ago.

“When my daughter was 14, she told me she was hearing The New Kids on the Block sing ‘Happy Birthday’ to her through the air conditioner,” Howard said. “And she had some problems, but I think that was the thing that really knocked me over.”

They saw doctors for a year before Howard’s daughter, Cassie, received a diagnosis: chronic paranoid schizophrenia.

Although medication helped, becoming an adult still brought about unusual challenges for Cassie. For many years, fellow employees made it difficult for her to hold down a job. 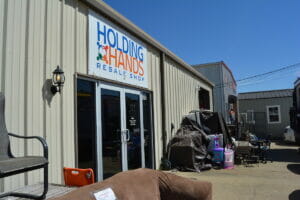 “She’s almost 40 now, but she still acts like a teenager because she became sick at such an early age,” Howard said. “It’s hard to understand why people act like that when they’re supposed to be grown.”

According to Howard, Cassie would complain every day after her grocery store job. She begged her mother to let her quit. Around that same time, Howard and her sister-in-law went shopping in Nashville. They visited a thrift shop whose owner had started the business in order to employ his autistic daughter and others with disabilities. Howard left the store with an idea.

So she did what she does every morning to start her day, what she does in times of need and times of thanks: she prayed. She prayed and prayed and consulted her financial advisor, and at first it didn’t seem feasible. But then, as Howard describes it, it all just fell into place. 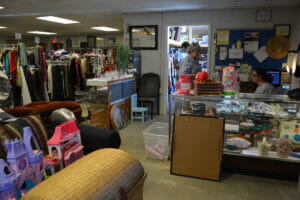 Howard quit her job as director of radiology in Booneville, where she’d been working for eight years, and set out to open a business where Cassie could work in peace. Holding Hands was born.

“We employ people with mental illness because they’re the most underserved population,” Howard said. “Not everybody can work with them, and not everybody understands them. You know, if you look normal, then you should act normal. That’s how most people think. And that’s not the case.”

Today, in addition to her employees, Howard has two “support staff,” she calls them, who help her run the business.

But there are still challenges. Howard admits that sometimes, her employees don’t work as fast as she’d like. She has to take a deep breath and tell herself that it’s okay.

It’s better than okay: this work is more fulfilling to Howard than anything she’s ever done.

“Seeing the people that work here being so comfortable and content and doing so well, that’s what’s rewarding for me,” Howard said. “And Cassie never complains about coming to work, even though she has to come to work with her mother everyday — that’s what she says —it’s not so bad. And that’s what makes it all worthwhile. It’s just been such a pleasure.”

And it’s a pleasure to the families of Howard’s employees and to her customers as well. 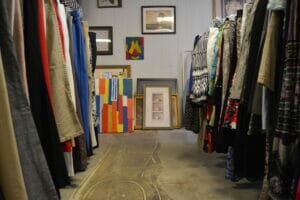 Lafayette County Justice Court Judge Mickey Avent first visited the shop while hunting for antiques. After hearing about its mission, he became a regular customer and friend of Howard’s. Avent soon decided he wanted to get involved and has recently become a Holding Hands board member.

“I believed it was an opportunity to help an organization that helps people learn the skills necessary to better themselves, to hold employment and to teach them responsibility,” Avent said.

He said that Holding Hands is an asset to Lafayette County and the city of Oxford.

“It gives people with disabilities a place to go and learn a job skill and feel like a contributing member of society,” Avent said.

To Howard, Lafayette County and the city of Oxford are the assets. 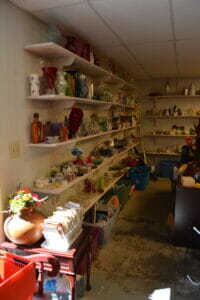 “I couldn’t have done it without them,” she said. “I don’t know what I expected when I did this. I don’t think ahead. I think, ‘God’s got it tomorrow, and he’ll have it the next day, and it’ll all work out.’ And it has. He has been amazing. He has provided all the way, but the people of Oxford . . . I don’t think I could ask any more of them.”

According to Howard, the giving is always perfectly timed. Once, the store received nine truckloads of items from the home of a hoarder who had died. Another time, 93 apartment buildings were being demolished and Howard got a phone call asking if she wanted the appliances — all of them.

“The one thing I have to say is that God has been in this from day one,” Howard said. “There have been times when we were low on furniture and stuff, and I’ll start praying, and then we’re covered up, and they’ll say, ‘Please stop praying for furniture! We’ve got too much!’

Her only wish is that there were more hours in the day.

“I would love to open stores all over the United States to help people if I could,” she said. 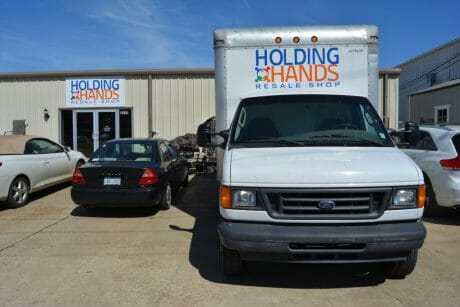 Anna McCollum is a senior print journalism major at The Meek School of Journalism and New Media. For questions or comments, email us at hottytoddynews@gmail.com.