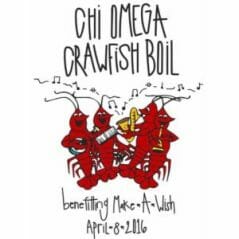 Chi Omega will host its annual crawfish boil this Friday, April 8 from 11 a.m. to 2 p.m. on the back porch of the Chi Omega house on Rebel Drive.

Each year the Tau chapter of Chi Omega hosts “Chi O Crawfish,” an event that began as a way to honor the lives of five Chi Omega’s—Margaret Emily Gardner, Mary Pat Langford, Elizabeth Gage Roberson, Robin Renee Simmons and Ruth Hess Worsham—who died in the tragic accident on March 26, 1987, while participating in a walk-a-thon from Batesville to Oxford when a truck struck them.

“These women died doing something for somebody else,” said Tracy Buchanan, a member of the chapter at the time of the accident and current philanthropy advisor to Tau. “They lost their lives while participating in their sorority’s philanthropy event.”

Each year, Buchanan speaks to the chapter about the accident and why Chi O Crawfish is so meaningful to Tau. The event serves for many as an outlet to remember the sorority sisters that were lost 29 years ago. Women from all over the nation who knew Margaret, Mary Pat, Beth, Robin and Hess, come to celebrate their lives.

“The first crawfish was in honor of the 20th anniversary of the accident,” Buchanan said. “Each year it has grown and more alumni continue to return who had a connection with the chapter at that time.”

Proceeds from the event go to benefit Make-A-Wish Foundation, Chi Omega’s national philanthropy. Through Make-A-Wish, the Tau chapter has granted several wishes to members of the Oxford-Lafayette community and Ole Miss students.

“Granting wishes goes beyond just making someone feel better, there is a deeper meaning beyond the surface,” Mary Henley Green, Tau’s Philanthropy Chair, said. “It is giving a child hope and something to live for beyond their sickness. Tau strives to make this possible; for them to continue to fight.”

The Tau chapter has been the top fundraiser for Make-A-Wish Mid-South for the past two years.

“Last year we raised $47,000 for Make-A-Wish. Tau was able to fund the granting of six wishes with the money we raised,” Green said. “We hope to be able to fund even more wishes this year.”

The annual event is hosted on the back porch of the Chi Omega house with live music and plenty of boiled crawfish. Tickets are $10 and can be purchased upon entrance at the front door of Chi Omega or in advance from any member of Chi Omega.

Hannah Pickett is an intern for HottyToddy.com, and a current student of the Meek School of Journalism and New Media. She can be reached at hannah.pickett@me.com.