Following In the footsteps of its bigger and more experienced sister-broadcast, Thacker Mountain Radio Hour, the Thacker Mountain Jr. Kids Hour is testing its legs at various locations around town and, so far, seems to be a welcome and wholesome activity for our young locals.

On Tuesday, April 26, Thacker Jr. rolled out the carpet as a test of sorts to determine if the program is indeed viable as wholesome entertainment for kids, one that might be embraced by our community. Deduction: It most certainly is.

Since the show is in its inception phase, money for production is obviously an essential concern of organizers. For programming of this magnitude, funds are a necessity that must be tackled from the beginning. 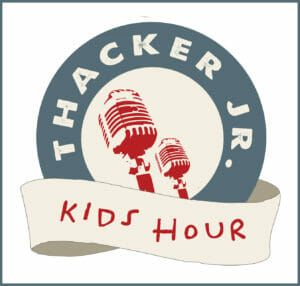 With that in mind, a website via Generosity.com has been set up at: Generosity.com/Thacker Jr. There, patrons and sympathetic locals can donate to the worthy cause of educating and entertaining our youth.

Via the collection site, Thacker Jr. is described as “a half-hour radio program recorded live from various locations within the Oxford community. For our inaugural production, we partner with Leap Frog – a non-profit tutoring program for at risk elementary students in the Oxford community – to celebrate the achievements of first, second and third graders. All funds raised will go toward throwing this event to provide these students with access to great children’s literature and musical performances in a fun and educational environment.”

With the success of yesterday’s recorded show – one that was a first for many of the students in attendance – other shows are in the pre-planning phase and contributions, as always, are needed and encouraged.

“Thacker Mountain Radio Hour was thrilled to team up with Leap Frog for our first ever Thacker, Jr. production,” Kathryn McGaw York said. “This first edition was performed specifically for Leap Frog first- through third-graders. Our hope is to use the pilot performance to build future events like this one that can include many more of our Mississippi students.”

As many local adults and guests can attest (and now, our kids), the professionalism and popularity of each Thacker Mountain Radio Hour broadcast has become a staple of Oxford and Lafayette County, one that will have difficulty moving forward and evolving without our combined support and active attendance – the latter of which has never been a problem.

For more information, contact Kathryn McGaw York by email at krmcgaw@gmail.com of visit the Thacker website at ThackerMountain.com.